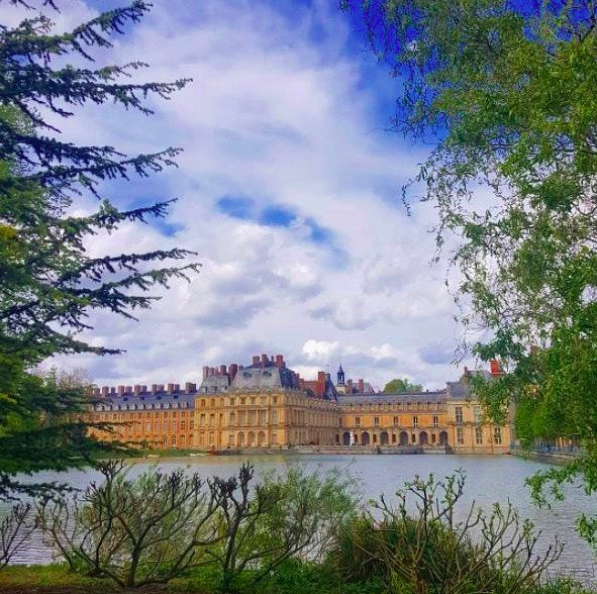 This is probably going to come as a huge surprise to anyone who knows about my serious passion for French history, but despite longing to see it with my own eyes for several years, it was only recently that I finally managed to visit Fontainebleau. Although Versailles is obviously revered as THE iconic French palace, Fontainebleau also has plenty to offer to history fans – after all it was already a significant royal residence when Versailles was still just a mere twinkle in Louis XIV’s eye and continued to be enjoyed by royal courts well into the nineteenth century, long after Versailles had been effectively abandoned. Contrary to popular belief, the French royal court did not spend their entire privileged existence holed up in Versailles, geographically and culturally cut off from the rest of the country. If you believe Coppola’s Marie Antoinette, you would be forgiven for  thinking that once she arrived in Versailles as Dauphine, she remained there until the fatal day in October 1789 when the mob carted her back to Paris. Not so. In reality, the court divided their time between Versailles, Rambouillet, Compiègne, Fontainebleau and then later on, Saint-Cloud.

There has been some form of royal residence in Fontainebleau since the 12th century, although it wasn’t until the 15th century, when François I came to the throne and decided that it would make an excellent country residence, that the old château really began to blossom as it was transformed into a magnificent and rather huge palace, well able to host foreign dignitaries, act as venue for royal celebrations and accommodate the royal family and the enormous entourage of courtiers and servants that followed them on their travels. Fontainebleau continued to be a favourite residence of François’ successors, the Valois kings, who continued to enlarge and beautify the Renaissance palace. It was a particular favourite of that tangled ménage à trois formed by Henri II, his wife Catherine de’ Medici and his mistress Diane de Poitiers, who have all left their mark on the building, including the stunning frescoed ballroom. When the Valois dynasty came to a sudden end with the assassination of Henri III in 1589, their Bourbon successors upon the French throne also favoured Fontainebleau and enthusiastically made their own improvements to the palace, significantly enlarging it and adding various embellishments.

The young King Louis XIV was extremely fond of Fontainebleau and it was here that he enjoyed a brief romance with his sister-in-law Henrietta of England (subject of my new biography, which is coming out at the end of September!) before falling in love with her maid of honour, Louise de la Vallière – probably thanks in part to her famous prowess on the hunting field. During Louis’ reign, the court would travel to Fontainebleau every year at the beginning of autumn in order to enjoy hunting and other outdoor pastimes in the enormous forest that surrounds the town. His grandson Louis XV also enjoyed Fontainebleau and in the 1750s commissioned Ange-Jacques Gabriel to create an entirely new wing in the graceful classical style of the time. His work was continued by Louis XVI and Marie Antoinette, who were responsible for adding more buildings and creating a series of exquisite interiors, including the Queen’s beautiful mother of pearl boudoir and a games room, where she and her frivolous inner circle could gamble the night away – which actually happened during her twenty first birthday, when some of the finest croupiers in Paris were paid to come out to Fontainebleau to preside over a three day gambling party. Sadly for Marie Antoinette, the party would come to an abrupt end in 1789 and like Versailles, the fate of Fontainebleau hung in the balance as the new rulers of France decided what to do with the royal lands that they had seized. Luckily for us, Fontainebleau would come through the revolution relatively unscathed although, like Versailles, many of its magnificent furnishings would be sold and dispersed throughout Europe. One of the few pieces not to be lost in the turmoil is the great state bed ordered for Marie Antoinette after her last visit to the palace in 1786 and never actually slept in by the unfortunate Queen.

Fontainebleau had its next heyday during the reign of Napoléon I, who much preferred it to Versailles and made it one of his chief residences, where he lived firstly with Empress Joséphine and then with her successor Marie Louise, a great niece of Marie Antoinette, who must have felt more than a little spooked to be residing in the former apartments of her ill fated relative and sleeping in her state bed. It was at Fontainebleau that Napoléon abdicated in March 1814 before being exiled to the island of Elba and as a defeated former Emperor on Saint Helena he would fondly remember Fontainebleau as being ‘the true residence of Kings’ and one of the finest palaces in Europe – suggesting that it was Fontainebleau’s long and venerable history, represented by its sprawling size and rather charming hotchpotch of different architectural styles, all evocative of its different owners over the centuries, that had made him prefer it to Versailles, which had only served as a significant royal residence for just over a hundred years. Certainly, Napoléon’s nephew agreed when he seized power and became Napoléon III, reigning with the exquisite Spanish beauty Eugènie de Montijo at his side. Together the new Emperor and Empress of the French transformed Fontainebleau into a perfect country residence, combining imperial opulence with all the lavish comforts of the mid nineteenth century and converting several disused areas of the palace into dozens of sumptuous apartments, laid out like a luxury hotel and designed to accommodate favoured courtiers and guests, who would also be treated to an apparently never ending round of balls, concerts, card parties, hunting, picnic and theatricals. Although Napoléon III and Eugènie definitely preferred their other, more bijou and perhaps aesthetically harmonious, royal estates at Saint Cloud and Compiègne, like Napoléon I they were fully conscious of the historical significance of Fontainebleau and spent a great deal of time there until their empire was overthrown and they were forced into exile.

Nowadays, Fontainebleau forms an interesting counterpoint to the rather more well known Versailles, not least because it attracts much fewer visitors. We went on a beautiful day in May and were pretty much the only visitors, which was lovely but also seemed a shame as it deserved to be as busy and popular as Versailles was just a couple of days earlier. Nonetheless, we thoroughly enjoyed our visit and I’d love to go back again someday.

I love Georgette Heyer – do you? 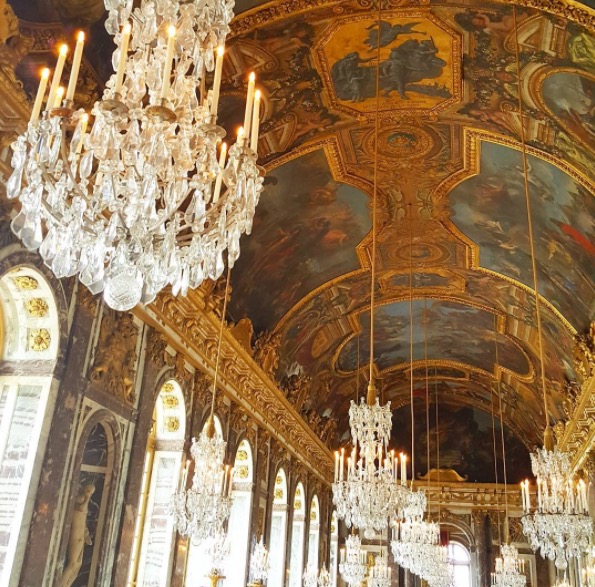 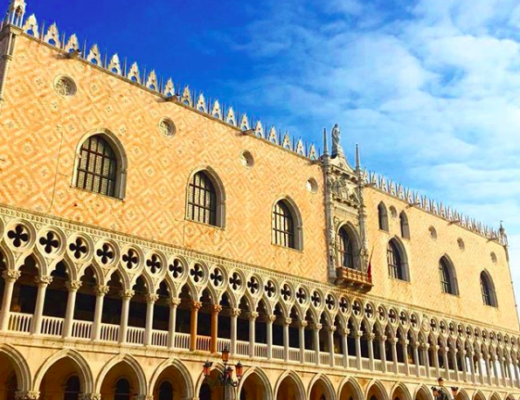