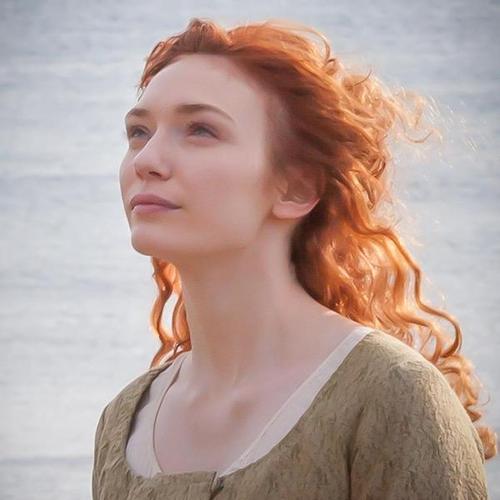 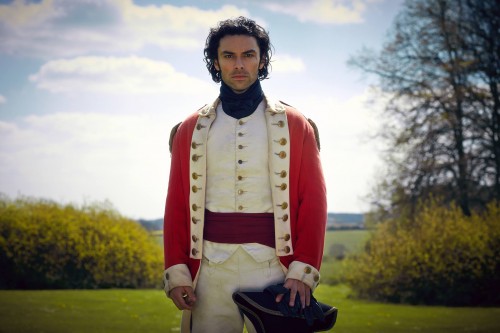 One of my happiest memories is a brief period just after the birth of my youngest son, when all I was fit for was lying on the sofa and feeding him while watching every single episode of Poldark. I’d read the books as a child (veteran readers of this blog may recall that I wasn’t allowed to read normal children’s books when I was growing up and instead subsisted on a diet of my grandmother’s historical fiction collection from a perhaps too early age) but hadn’t attempted to watch the iconic seventies series until I was much older. I was enraptured and engrossed by it though and very definitely smitten with Ross and Demelza, the central couple whose story forms the crux of the action as they attempt to mend both Ross’ waning fortunes and their own complicated relationship.

I was beyond excited therefore when I heard that the BBC and Mammoth Productions were planning to produce another adaptation of Graham’s brilliant books and EVEN MORE so when I found out that it was to star Aidan Turner, who is a bit lovely even if he did almost run my husband over with his bike once and publicity stills of a smouldering Ross and gorgeous flame haired Demelza only served to increase my impatience to see the final product. I was disappointed when I found out that a BFI preview of the first episode had sold out long before I’d even heard about it, but nonetheless duly entered two competitions for tickets in the hopes that my luck would change and I would get to be among the lucky few who were first to see Poldark. 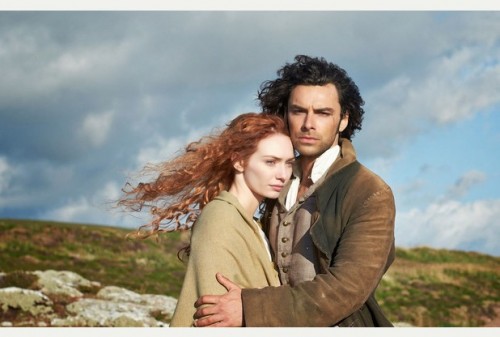 Dear readers, to cut a long story short – I ONLY BLOODY WON ONE OF THEM. And so, on Monday night, I found myself (after a lot of Mexican food at Wahaca next door), lurking in the foyer of the British Film Institute with my friend Laura, being amused by the female/male ratio of the audience, which was VERY heavily weighted to the former. It was clear that the majority of people were there to see Aidan Turner IN THE FLESH and there was a buzz of excitement when the man himself wandered in with other members of the cast and crew to take their seats for the performance. He wasn’t sitting too far away from us so we sneakily took photos, but demurred to actually go over and meet him because we’re too cool (and socially awkward) for that sort of thing. Anyway, suffice to say that Aidan Turner is every bit as handsome in the flesh as he is in photographs. My friend Laura said that she thought her eyes might actually melt if she looked at him for too long and I kind of ruined this tribute to his handsomeness by adding: ‘Yes, like the bit in Raiders of the Lost Ark when the Nazis open the box and start melting. KEEP YOUR EYES SHUT, MARION. WHATEVER HAPPENS, DON’T OPEN THEM.’

Poldark itself is astonishingly good and fans of both the original books and the television series need have no fears at all. It’s beautifully shot and obviously a real labour of love for everyone involved as everything is really just spot on – the cast, the costumes, the locations, the tone, everything. Aidan Turner fans will be pleased to hear that there’s loads of shots of him staring moodily into the distance or riding his horse against a beautiful Cornwall sunset. However, sorry Aidan Turner fans, I would have to say that the wild and gorgeous Cornish landscape is actually the real star of this show and it is presented here in all its most awe inspiring magnificence with great rolling heaths, crashing waves and dramatic cliff edges. It really is stunningly well shot. 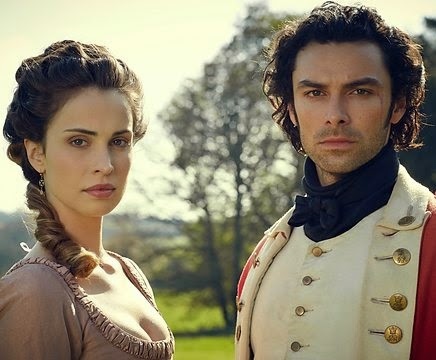 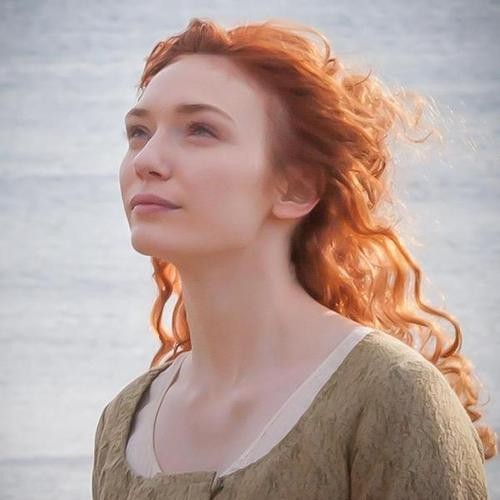 The first episode concentrates on Ross’ (described by Emma Kennedy during the Q&A as ‘part Heathcliff, part Darcy, part Cash in the Attic’ thanks to his rock hewing activities, aristocratic good looks and proud demeanour and habit of rifling through drawers in search of heirlooms to sell) less than amazing home coming to his ancestral lands after three years away fighting in the American War of Independence. He’s scarred, disillusioned and homesick and worse is to come when he discovers that not only is his father dead and the family home a total mess but the girl he loves is now lost to him as well. He spends most of the episode heart sick and miserable, but there’s glimmers too of the fair mindedness, charisma and good humour that makes him, ultimately, such a likeable character. He toys with the idea of leaving Cornwall for a more hopeful future in London but even without knowing what’s to come, you know that this guy is far too honourable and hard working to actually up sticks and leave when things go sour.

It makes for compelling viewing and although it lacks the underlying brutality of its contemporaries like Ripper Street and Peaky Blinders, it clearly comes from the same grimy, gritty but sharply, keenly intelligent stable and I can’t wait to see how it all unfolds. So yes, worry not, Poldark fans, I reckon you’ll fall just as much in love with this new interpretation (and the new, wonderfully spiky Demelza played by the beautiful Eleanor Tomlinson!) as you did with the other and I think the BBC has another tremendous hit on its hands with this plus, at eight episodes it looks like a much longed for return to the glory days of Sunday evening dramas. Remember them? When the whole family would gather around the television for an hour of costume drama fun. 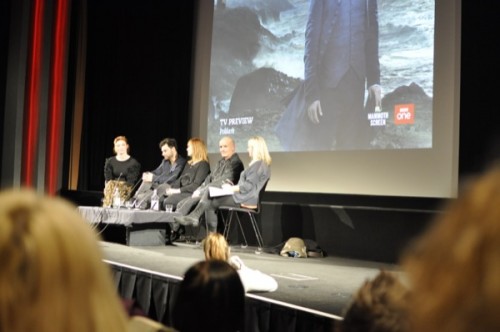 After the show had ended, we were treated to a lengthy Q&A session with the writer, producer and their Ross and Demelza (who was wearing THE most gorgeous glittering gold sequin skirt), who talked at length about their inspirations, how they interpreted the original books, what it was like to recreate such iconic and much loved characters and how much they enjoyed working on the set in Cornwall. It’s obvious that they all really loved working with each other and that bringing Ross Poldark’s world to life again was an absolute joy to do. This actually makes me even more keen to see the rest of the series – I was won around to the Game of Thrones series in a similar way as I saw the pranks, excitement and happiness of the cast and reckoned that whatever they were working on MUST be worth watching. You can buy a cast, sure, but you can’t fake that level of enthusiasm about a project and to me now it’s always a sign that something must be really well worth seeing. 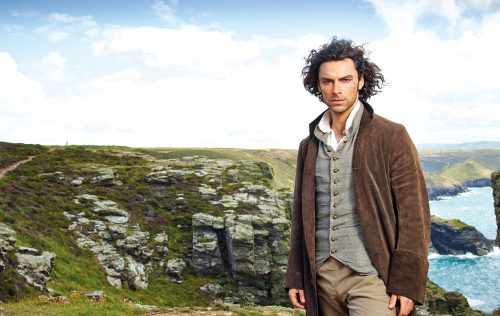 Poldark starts on BBC1 on Sunday 8th March and is BLOODY BRILLIANT. Seriously, just wait until see but don’t stare too hard at Aidan Turner’s extraordinary handsomeness or, y’know, the evil Ark spirits will get you. 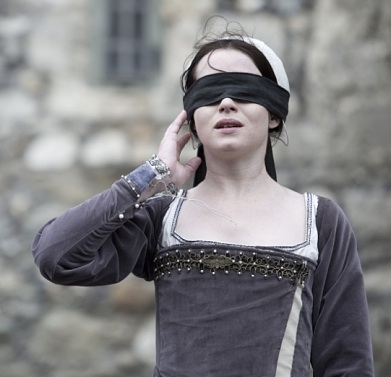 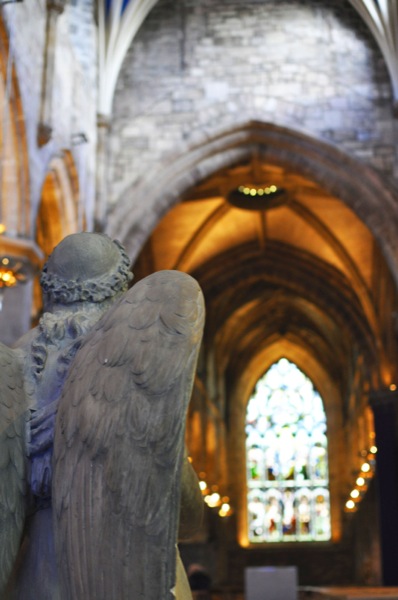