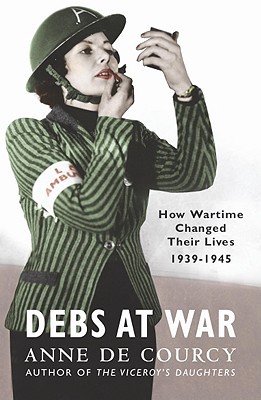 I was so enamoured by Anne de Courcy’s 1939: The Last Season

afterwards to follow the adventures of her 1939 debutantes as they tackled the war years.

Debs at War is an excellent introduction to the war as experienced by British women, albeit with a rather upper crust slant on the situation. I suppose this is often the case though – so much of our knowledge of history is drawn from the experiences recorded by the literate upper and middle classes as well as examination of the objects and houses that belonged to them – their superior quality generally meaning that more has survived into the modern day than the belongings of the lower classes. This is a shame. 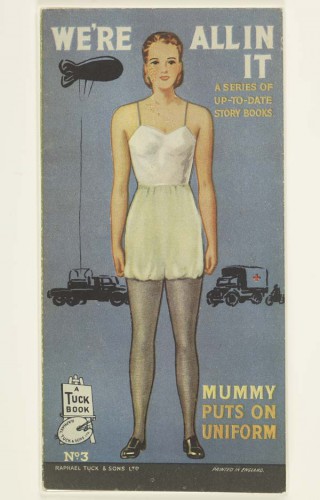 However, if you’re expecting Debs at War to be a breathless account of evenings at the Café de Paris, balls, tea parties and picnics with handsome officers then you will be (almost) disappointed as it predominantly looks at the serious war work carried out by well heeled girls, whose education, so lacking in many respects, made them uniquely suited to espionage, code breaking and the Special Operations Executive. Pathetically untutored in mathematics though some of them may have been, the insistence that upper class young women be educated to fluency in French and German and also sent abroad for months on end to be ‘finished’ in these countries, stood them in good stead when it came to recruitment for certain posts within the War Office or at Bletchley Park.

They didn’t all embrace the glamour of code cracking, translation or being dropped into occupied France though – many of the young women in this book also opted for the far less glitzy occupations of nursing, working in factories, joining the Land Army, driving officer’s cars and breaking in horses for military use. A few even flew planes, although not in combat and many more were employed by the Wrens and other organisations.

It wasn’t all work though – devoted though they may have been to their war work, the young women in De Courcy’s book also loved nothing more than finishing a shift then heading off to London on a 24 hour pass to meet up with friends and lovers and enjoy themselves a little before heading back to their everyday toil. Many of the women interviewed for the book (and it is primarily drawn from first hand accounts) comment that they never really felt afraid at any time as they were still young enough to feel invincible even though death was touching everyone around them. This cocky defiance certainly shines through as we read about their jaunty escapades in war torn Britain. 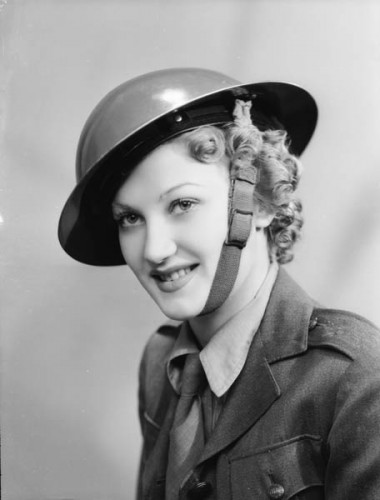 Image of a woman modelling a hairstyle and uniform for the ladies hairdresser T. Vasco Ltd, 1939. Photo: Museum of London.

Of course this is a rather narrow view of the work carried out by women during the Second World War, excluding as it does the experiences of middle and working class women unless they directly associated with the ‘debs’ of the title but it’s still possible to get a flavour of what it must have been like to be a young woman at this time as, class aside, there are many facets to this that are universal – a desire to impress, to please your family, to fall in love, to be admired, that were shared by most young women back then if not now.

I suppose the grittiest chapter is the one that deals with factory work, which a surprising amount of well heeled young women opted to do for whatever reason, although they seem to have been mostly careful to conceal their backgrounds from their fellow workers for fear of ridicule or hostility. In fact, a number of the women interviewed mentioned being treated less favourably because of their accents and titles, which made them more determined than ever to prove themselves every bit as hard working as their fellows. It must have been a massive culture shock though and this really comes across, with several of them talking about how they were virgins and didn’t know even the most basic facts of life and yet were expected to be in charge of other women who had had rather more down to earth upbringings.

However, you can really sense the wistfulness too as some of the women reminisce about their war experiences with at least one commenting that she knew at the time that the war would be the most important part of her life. A culture shock though it must have been, the excitement must have been heady and for these mostly idle and pampered young women to be given jobs and a sense of purpose must have been eye opening indeed. No wonder so many of them carried on with their work when the war had ended – I think that I too would have been loath to return to the old ways after so much upheaval.