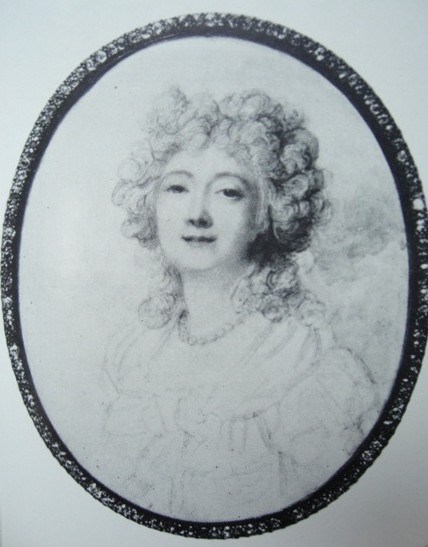 On the 8th of December 1793, Madame du Barry, the final mistress of Louis XV was taken from her cell in the Conciergerie, whence she had been transferred from the far more salubrious prison of Sainte Pélagie two days earlier and carried, struggling and shrieking for mercy, to the tumbrel that waited to take her to the guillotine.

Born Jeanne Bécu in Vaucouleurs on the 19th August 1743, she was the illegitimate daughter of a gorgeous seamstress and a friar – a shocking beginning to what was to be a scandalous life. Jeanne, dragged up by her mother then fortuitously sent to a convent school by a wealthy benefactor, was to grow up to be exceedingly beauteous with a lovely face, tumbling blonde hair and meltingly seductive violet eyes. Sadly, her fiscal prospects were non existent and the presence of protective adults was minimal so the young Jeanne after an initial attempt to train as a milliner soon found herself working in a casino come brothel.

She was ‘rescued’ from this life by a noted roué, the spurious Comte du Barry who installed her as his mistress then launched her career as a high class courtesan to men of the court. Jeanne does not appear to have been adverse to this life, being untroubled by too much in the way of morals and blessed with a budding taste for expensive luxuries. 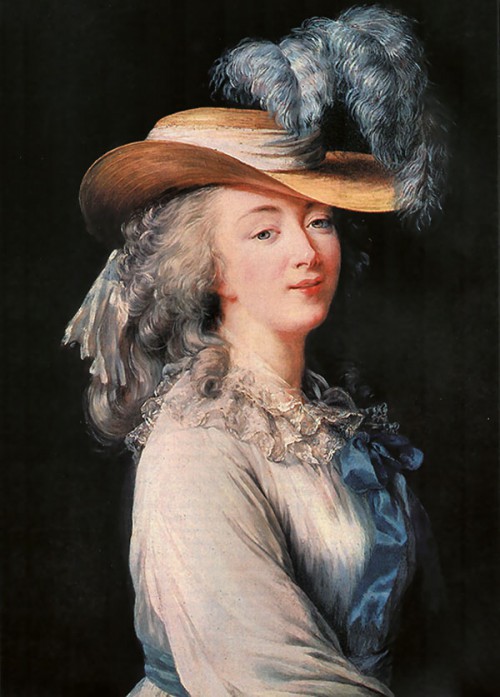 She did very well for herself until 1768 when on a visit to Versailles, she came to the attention of another aged roué, Louis XV who, always prone to depression, had been in a protracted state of bored gloom ever since the death of his exquisite mistress, Madame de Pompadour. He’d ignored all of his courtiers attempts to divert his attention with various beautiful and well born ladies of the court and had instead consoled himself with the less demanding charms of servant girls and young women who were housed in his private brothel in Versailles.

He was instantly smitten by the young Jeanne and it wasn’t long before her lover du Barry’s brother was forced to marry her in order to make her position more respectable and enable her to have the title that was so necessary for an entrée to Versailles life. After this there was no stopping her and to the horror of all, the King even installed her in apartments in the palace. No one in Versailles had any illusions about the origins of the latest favourite, lovely thought she was. They’d all sneered at the middle class origins of Madame de Pompadour, so you can imagine how they felt about having Madame du Barry prancing around in their midst, dressed up in pink silk and exquisite lace and covered in the diamonds that she adored so much. 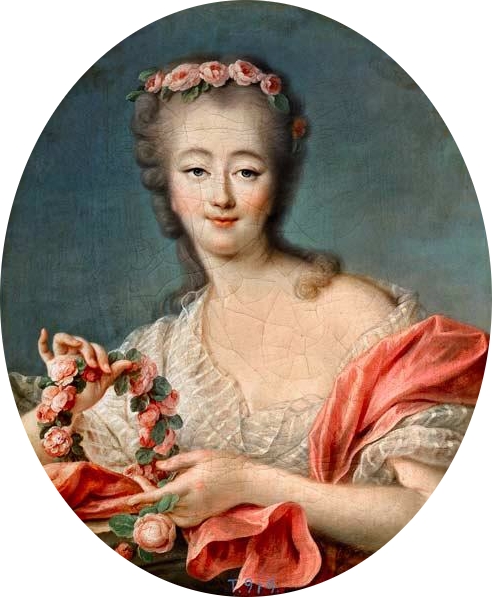 The good times didn’t last for long however as in May 1774, Louis XV died of small pox in his room at Versailles and Madame du Barry, who was loathed by his young and rather prudish grandson and heir Louis XVI and his wife, Marie Antoinette was promptly sent away from court and at first compelled to enter a convent, although she did not remain there for long.

Madame du Barry was never again received at court but does not seem to have regretted this exile too much as she had her own beautiful chateau at Louveciennes and seems to have lived there very happily throughout the rest of the 1780s, taking one lover after another, patronising artists and being a lady bountiful to the local people.

She did her best to live out the revolution in relative obscurity but her fame as one of Louis XV’s most extravagant mistresses and also, as usual, her total lack of proper advice and support were to be her downfall. 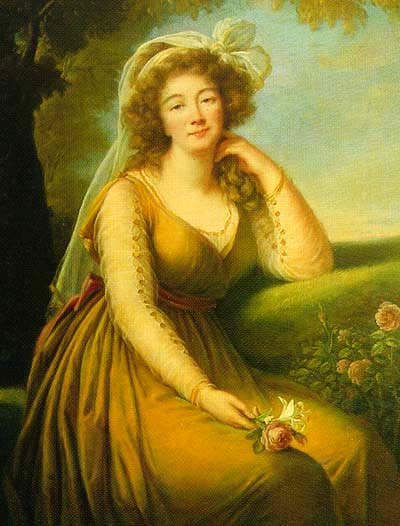 On the night of the 10th January 1791, a significant amount of the Comtesse’s jewelery collection had been stolen from her bedroom and she had moved heaven and earth in an attempt to retrieve it, which necessitated offering a reward and several trips to England. If she had only remained in London, where she had friends, then she would have been safe and would have come to no harm. However, not being too bright, she always returned to France and eventually these trips brought her to the attention of the hostile authorities, who were hardly likely to be sympathetic about her tale of stolen diamonds.

It was not long before she was arrested, in March 1793 and then imprisoned alongside Madame Roland in the prison of Sainte Pélagie in Paris. The unfortunate woman seems to have spent her days between hysterical fear and a belief that she would be able to buy or charm her way out of her predicament even if the chance of this actually happening was not exactly favourable and became even less likely when she was transferred to the Conciergerie at the beginning of December 1793, this being the traditional French Revolution precursor to a trip to the guillotine.

However, poor Madame du Barry never lost this desperation to save her skin and after being sentenced to death at the end of her trial on the evening of the seventh of December (whereupon she fainted from sheer terror and then had to be carried back to her cell where she was revived by Madame Richard, the warder’s kind hearted wife) she spent the night mulling over what to do next. The next morning she was more composed and when the executioner arrived in her cell at eight the next morning to cut her hair and prepare her for execution, she had calmly informed him to cool his boots as she had important information for the Committee of Public Safety – namely the precise locations of her vast and celebrated collection of jewels, most of which had been presents from a series of noble and royal lovers. 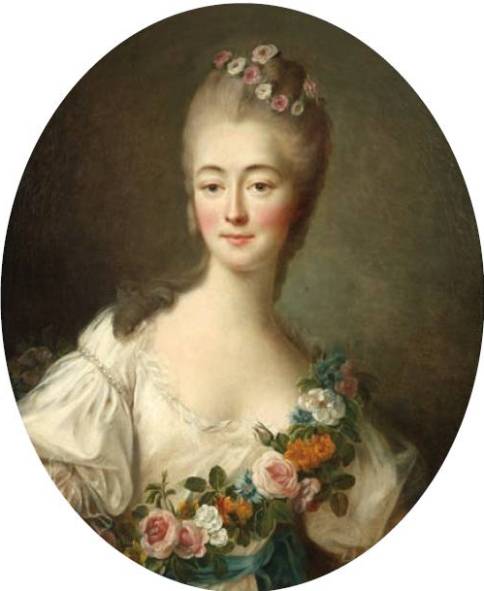 If Madame du Barry really thought that the location of her treasure would be considered a fair swap for her hidden treasures then she was, of course, deluding herself but I’m sure she allowed herself a flickering of hope when three men were duly sent by the Committee to take down the list of her jewels and where precisely each item could be found either on her beautiful estate at Louveciennes or in London. For over three hours, she sat in her cell and listed the jewels before finally coming to an end at around midday, at which point the officials left with their precious list.

However, no sooner had Madame du Barry allowed herself a sigh of relief than back the executioner came with his assistants and with no further ado, forced her down on her chair so that they could cut off her hair then tied her hands behind her back. The poor woman’s sacrifice had availed her nothing more than a few hours reprieve from the scaffold.

‘When she felt the cold touch of steel on her neck, giving her a foretaste of the horror to come, and she saw her lovely golden curls, barely streaked with grey, lying on the dusty floor, the woman who had once been the beautiful du Barry finally collapsed into a pathetic, whimpering creature dead to all sense of dignity and shame.‘ — Joan Haslip, Madame du Barry: The Wages of Beauty, 1991. 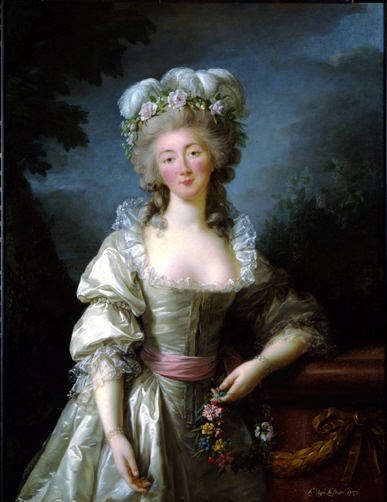 It availed her nothing and on a frosty day, the 8th December 1793, the still lovely fifty year old former courtesan was loaded on to a tumbrel and driven, crying and screaming through the streets of Paris to the guillotine. The aristocratic victims of the Terror prided themselves on their poise and haughty silence in the face of the baying mob – not so Madame du Barry who broke down completely and appealed ceaselessly to the crowds to rescue her from her fate in between screaming and crying with fear.

It was already dusk by the time the tumbrel arrived at the Place de la Révolution via its usual route along the Rue Saint Honoré. It was a freezing cold December day and the crowd was perhaps a little more sparse than usual due to the weather and the lateness of the hour but there were still enough people curious enough to see the former King’s favourite die for there to be a sizeable mob gathered to witness her execution. 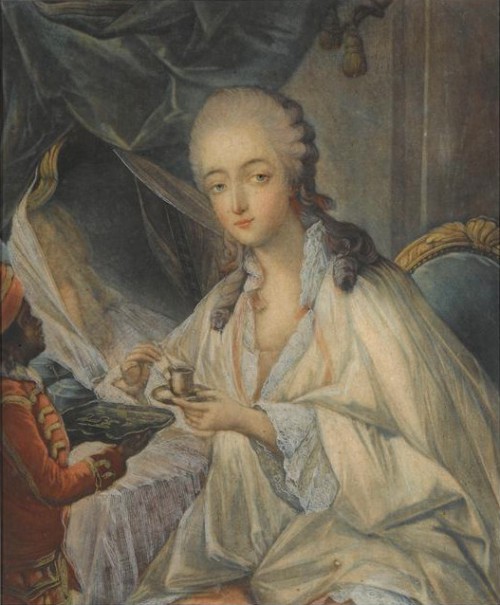 It must have been a relief to everyone involved to have finally made it to the square but Madame du Barry’s ordeal was still not over as she was carried down from the cart ‘more like a trapped animal than a human being‘ according to Joan Haslip then bundled up the scaffold steps still screaming and crying out for mercy while the crowd stared in astonishment. By this point the more hardened execution goers would have seen several hundred people die before them but it seems that Madame du Barry’s lack of poise and terrified cries of ‘You are going to hurt me! Oh please do not hurt me!’ was something of a surprise.

Sensing the horrified restlessness of the crowd, the already brisk executioner worked with even more speed than usual, hastily bundling the struggling woman on to the guillotine and forcing her down on to the plank as she begged him for ‘one moment more, please monsieur, do not hurt me.’ When the knife finally crashed down there was one last awful scream of terror before an uneasy silence fell across the square, broken only by the executioner’s shout of ‘Vive la Révolution’ before the next prisoner was hastened with rather more decorum up the slippery wooden steps.

Madame Vigée-Lebrun, who knew Madame du Barry very well and painted her more than once was to write: ‘Madame Du Barry … is the only woman, among all the women who perished in the dreadful days, who could not stand the sight of the scaffold. She screamed, she begged mercy of the horrible crowd that stood around the scaffold, she aroused them to such a point that the executioner grew anxious and hastened to complete his task. This convinced me that if the victims of these terrible times had not been so proud, had not met death with such courage, the Terror would have ended much earlier. Men of limited intelligence lack the imagination to be touched by inner suffering, and the populace is more easily stirred by pity than by admiration.’ 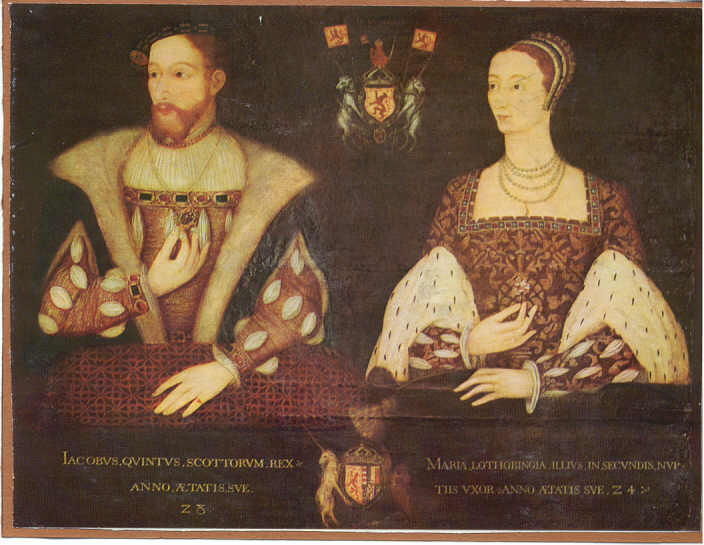