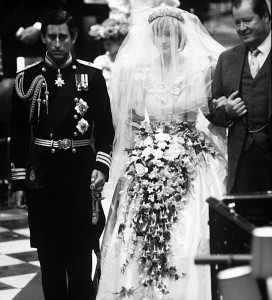 File photo dated 29/07/81 of Earl Spencer (R), accompanying his daughter Lady Diana at her wedding to the Prince of Wales, at St Paul’s Cathedral, London. Diana, Princess of Wales’s spare wedding dress, made in case of any mishaps on the big day, is now up for sale. The replica of the famous ivory silk gown was tried on by Lady Diana Spencer on the morning of her marriage to the Prince of Wales. It is expected to fetch more than Â£50,000 when it goes under the hammer next month through Cooper Owen auctioneers. The duplicate dress was made by designers David and Elizabeth Emanuel as a back up. A spokesman for Cooper Owen said: “The only difference is that the actual wedding dress had Queen Mary’s lace sewn on to the front. “It was made in case of any hick-up or disaster. See PA story SALE Diana. PRESS ASSOCIATION Photo. Photo credit should read: PA/PA.