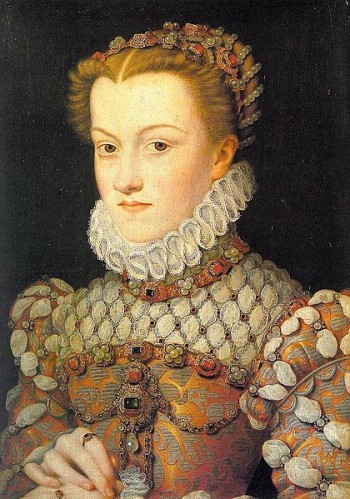 Elisabeth of Austria, Clouet, 1571. Photo: Musée Louvre. The first time I saw this portrait way back in 1989, there were a couple of American boys standing in front of it earnestly raving on about how ‘hot’ she was. Fair enough.

I was going to have a day off blogging today but then decided that no, actually, days off are for WIMPS and besides what better day to show off one of my favourite portraits than the birthday of its sitter?

I’ve always loved this portrait of the young Elisabeth of Austria, painted by Clouet shortly after her arrival in France in 1570 to marry King Charles IX. The sixteen year old princess was the second daughter of the Holy Roman Emperor Maximilian II and his extremely devout wife Maria of Spain, who was sister of Philip II and had been raised amidst great splendour at the courts of both Spain and Austria, although most of her life was spent in the latter at the Schloss Schalburg near Vienna.

Her marriage to Charles IX was celebrated with great pomp and ceremony that echoed the festivities almost exactly two hundred years later that marked the union between Marie Antoinette, another Austrian princess and the Dauphin Louis Auguste. Like Marie Antoinette, Elisabeth was married first of all by proxy on her home territory then made the arduous trip to France where the official wedding would take place, her progress being marked with a dazzling array of banquets, balls and celebrations.

Dazzlingly fair with blonde hair and lively brown eyes, Elisabeth was, like her erstwhile sister in law Mary Stuart, quite a catch for the French royal family – so unprepossessing themselves but nonetheless annoyingly exacting about the physical appearance of everyone else. Certainly her husband Charles, that strange youth, was initially very smitten by the young princess – having followed courtly tradition and dressing up in order to get a glimpse of her before the official meeting.

For her part, Elisabeth rather liked her husband as well but would be disappointed when he soon lost interest and returned to his mistress Marie Touchet, who may have been provided for him by his mother Catherine de Medici who was keen not to have a repeat of the enormous influence that his father’s mistress, Diane de Poitiers had wielded at court and so determined that instead her own son should have a more common mistress who would know her place and keep her nose out of matters that didn’t concern her. 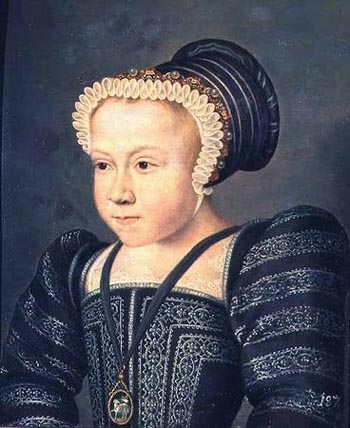 Marie Elisabeth de Valois, anon, 1578. The daughter of Charles IX and Elisabeth of Austria would die at the age of six.

This same determination to keep other women away from the sphere of influence was extended to Elisabeth too and although the young Queen was granted her own splendid coronation at Saint Denis in March 1571, it was made subtly clear that the real power behind the throne would always be the Queen Dowager, Catherine de Medici. Happy to give way to her domineering mother in law, Elisabeth instead retreated to her own favoured occupations of books, embroidery and religion and was rarely seen at court. Like her mother, Maria of Spain, she was intensely devout and found the licentious, debauched ways of the French court a disturbing and shocking contrast to the more strait laced and very etiquette governed ways of the Imperial court where she had been raised.

However, despite her piety, Elisabeth was utterly horrified by the violent events that marked the wedding of her sister in law Marguerite to the King of Navarre in August 1572 and would rebuke her husband for his part in the instigation of the St Bartholomew’s Day Massacre. Indeed, despite her staunch Catholicism, Elisabeth is known to have petitioned for several Protestant lives to be spared.

Elisabeth and Charles’ daughter Marie Elisabeth was born two months later on the 27th of October 1572 at the Louvre. She was to be the royal couple’s only child and was yet another one of Elizabeth I’s god children. 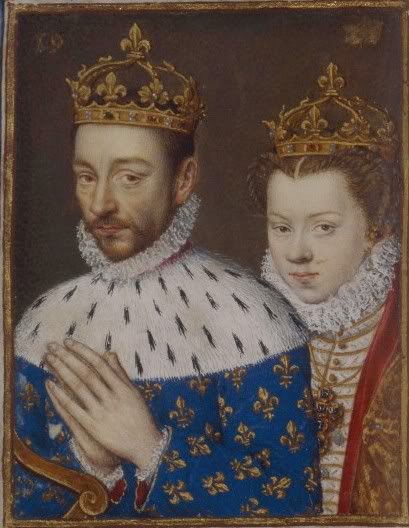 Like all of the children of Catherine de Medici and Henri II, Charles wasn’t exactly in robust health and it seemed to take a sharp decline after the horrific events of August 1572 and he would eventually die in May 1574, sincerely mourned by his wife who immediately retreated to the seclusion of the traditional white forty day mourning of French Queens, after which she made arrangements to return to her father’s court in Vienna.

There was a half hearted last ditch attempt (just as there had been when Charles’ elder brother Francois II died and Mary Stuart was left a young and eligible widow) to marry her to her brother in law Henri, who had succeeded Charles as King but Elisabeth was entirely uninterested and insisted on going home, leaving her two year old daughter Marie Elisabeth in the care of Catherine de Medici. The child died in April 1578 at the age of six, never having seen her mother again. 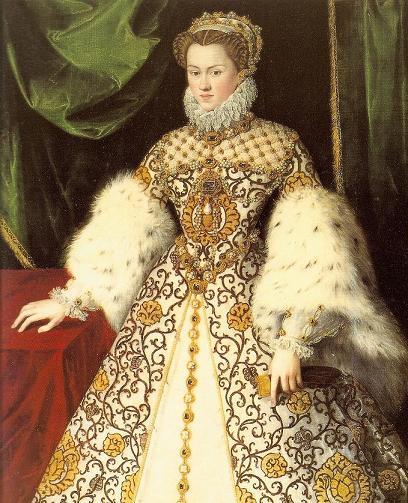 For her part, Elisabeth was never to return to France and refused all further offers of marriage, including one from her uncle Philip II of Spain after the death of his wife, her elder sister Anna. Oh dear. Instead she devoted her life to her religion and charitable good works. However, her life in France was not entirely forgotten – she remained proud of her title of Queen of France and even maintained a surprising correspondence with her former sister in law Marguerite who had been one of her only friends during her reign. When Marguerite was disgraced and cut off by her family, Elisabeth insisted on making her a generous allowance so that she would be able to support herself.

Elisabeth, former Queen of France would eventually die in Vienna on the 22nd of January 1592 at the age of thirty seven, venerated by all for her piety and good works.