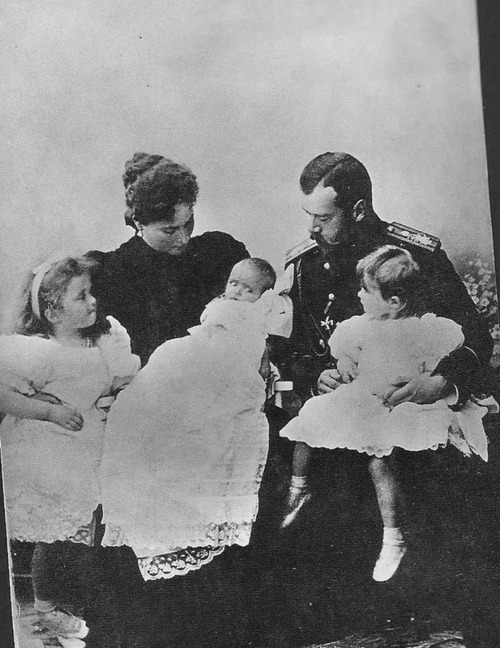 The Imperial Family with the infant Grand Duchess Maria, 1899.

A happy day: the Lord has sent us a third daughter – Maria, who was safely born at 12.10! Alix hardly slept all night, and towards morning the pains got stronger. Thank God it was all over quite quickly! My darling felt well all day and fed the baby herself. Mama arrived from Gatchina at 4 o’clock. The immediate family gathered in church for a Te Deum. Had tea with Mama; wrote telegrams and went through the unbearable papers. I only managed to get out into the fresh air after dinner – the evening was marvellous.’ — Diary of Nicholas II, 26th June (NS), 14th June (OS).

‘On the yacht Tsarevna,

What a joy that everything has ended safely, and the anxiety of waiting is over at last, but what a disappointment that it isn’t a son. Poor Alix! We, of course, are delighted either way – whether it’s a son or a daughter!’ — Diary of Grand Duchess Xenia, Nicholas II’s sister.

‘At 2 o’clock I received a telegram: THE GRAND DUCHESS MARIA NICOLAEVNA. And so, there’s no Heir. The whole of Russia will be disappointed by this news.’ — Diary of the Grand Duke Konstantin Romanov (Nicholas II’s cousin).

‘I am so thankful that dear Alicky has recovered so well, but I regret the 3rd girl for the country.’ — excerpt from a letter from Queen Victoria, Empress Alexandra’s grandmother to Nicholas II, 2nd July 1899. 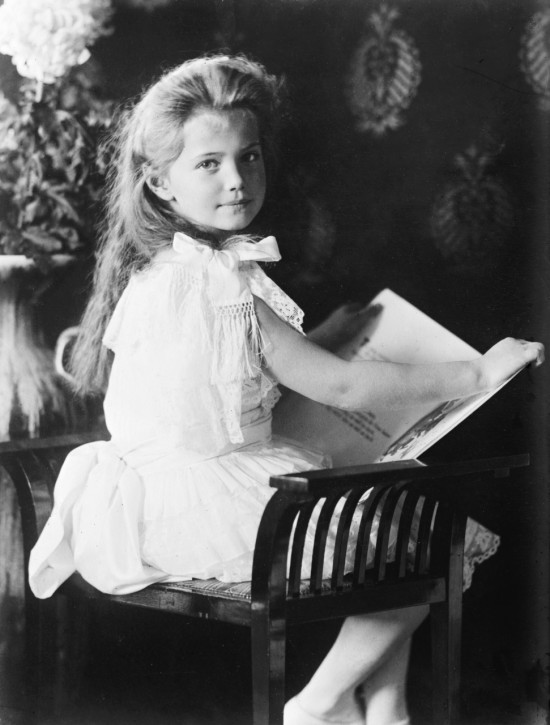 The Grand Duchess Maria Nikolaevna Romanov, third daughter of Tsar Nicholas II and his wife Alix of Hesse was born on the 26th of June (or 14th June as it was styled then) 1899 in the sumptuous surroundings of the Peterhof palace in St Petersburg. It would appear to have been a difficult pregnancy from the beginning with Alix feeling desperately unwell at the outset and then having trouble walking in the later stages, which necessitated the use of some form of wheelchair. Nicholas did not write the baby’s birth weight in his diary as was his usual custom but as Maria would later be somewhat on the strapping side, we can assume that she was also a rather big baby thus perhaps the anxiety on the part of his family as they awaited the birth.

Despite the disappointment expressed by various members of the royal couple’s family that Alix had given birth to a third daughter and Russia was still without a male heir, to his credit Nicholas himself does not appear to have been anything other than delighted with his daughters – with his wife getting pregnant so regularly and giving birth to such bouncing healthy babies, he almost certainly felt sure they would have a son one day and so it came to pass. 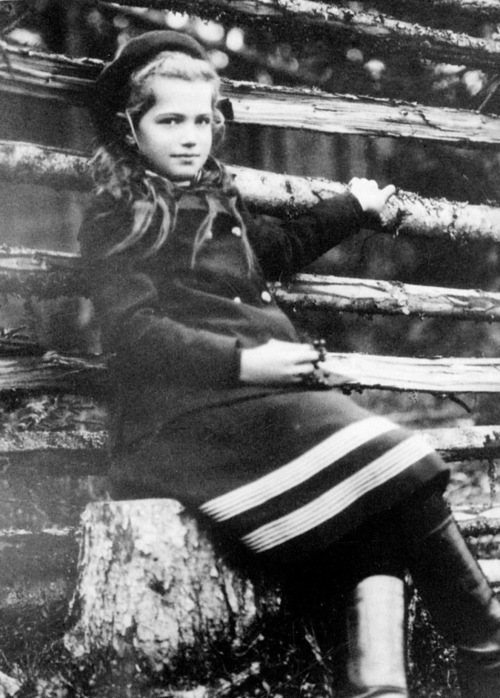 It would be impossible not to be charmed by the Grand Duchess Maria anyway – always chubby with huge blue eyes (known within the family as ‘Maria’s Saucers’, rosy cheeks and softly curling brown hair she was perhaps the prettiest if not the most classically beautiful (that would be Tatiana with her almost austere Russian high cheekboned beauty) of the sisters and was exceedingly sweet natured also – winsome, contentedly placid and well behaved right from the start. In fact so well behaved was she that when she was later apprehended stealing a handful of biscuits (she could also be rather greedy) from her mother’s tea tray, her father refused to have her punished for this transgression, saying laughingly that he was ‘always afraid of the wings growing. I am glad to see she is only a human child.’

Within the family, it was Maria’s rôle to be the peacemaker, pouring oil over troubled waters and soothing stormy situations whenever she could. While her elder sister, Tatiana was especially close to their mother, Maria was her father’s particular pet and would stay close to him whenever the family was together. Within her sibling group, it was Anastasia that she was closest to as together they formed the ‘Little Pair’, wearing identical clothes, sharing lessons and treats and sleeping in the same austerely furnished room. Although Anastasia was the younger of the two, she was also the noisier and more bossy which suited sweet natured Maria just fine. Her more strong minded elder sisters would never have been at someone else’s beck and call and certainly not that of a younger sister but Maria was content to let Anastasia boss her about and take the lead in their games. 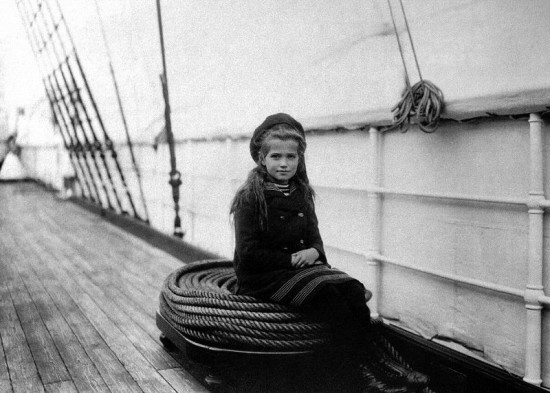 Placid and occasionally indolent, Maria took little interest in her lessons although she excelled at drawing. She was not ambitious and unlike her sisters took no interest in making a grand marriage or making a mark on the world – instead Maria daydreamed about marrying a handsome soldier and having several dozen babies. Her only ambition was to be happy.

Although all of the girls took an interest in young men and had their own light hearted flirtations as teenagers, Maria is perhaps the one best known for being a bit of a flirt, with an especial liking for the young soldiers on duty at her family’s palaces or on the royal yacht. She was prone to developing desperate crushes on various young men which would provoke mockery from her sisters and deep sympathy from her parents, who did their best to direct her thoughts elsewhere. If Maria had survived the Revolution then it’s possible that she might have eventually married her cousin, Prince Louis of Battenburg, who had the most immense crush on her. In later life he would become Lord Mountbatten and kept a photograph of Maria beside his bed to remind himself of her. 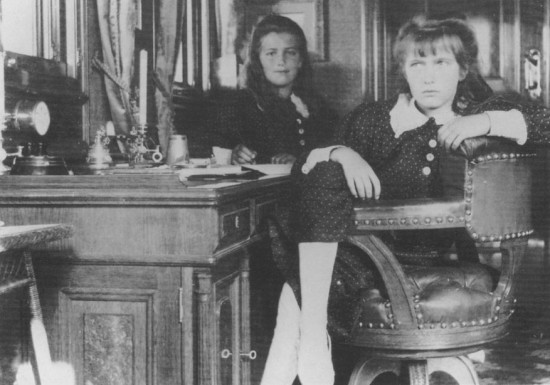 Although, her parents were initially amused by Maria’s flirtatious ways and little crushes on soldiers, things took a more serious turn during their imprisonment when apparently the Tsarina took her daughter to task for being overly familiar with the soldiers set to guard them and, allegedly, would eventually freeze her out altogether after an incident on her eighteenth birthday in the Ipatiev House, Ekaterinberg, when a young soldier called Ivan Skorokhodov brought in a cake as a gift for Maria, after which she and Ivan were caught together, allegedly in a pantry but versions of what happened vary. It’s believed that her mother and sisters cold shouldered her after this incident, horrified by her levity but also, perhaps, feeling that they could no longer entirely trust her. It’s very sad.

I feel desperately sorry for all of the Grand Duchesses and their brother, Alexei but I think that perhaps it is Maria that I feel the most sympathy with – mainly because of her clear desperate yearning to live a simple normal life with her soldier husband and their babies. The others may have scoffed at her for not wanting grand things, to make a difference to the world or to follow in the footsteps of formidable royal women like their grandmother Queen Victoria or ancestress Catherine the Great but I think this makes her all the more touching. 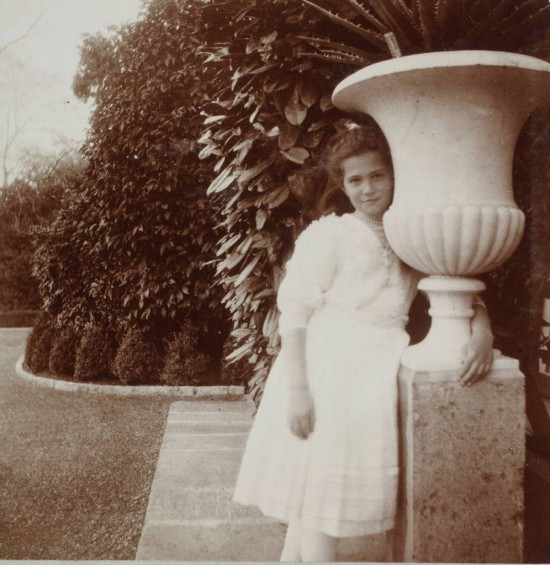 (These few weeks in late May/early June must have been a busy time for the Romanovs with the birthdays of Alix, Tatiana, Anastasia and Maria all grouped together! Isn’t it funny how that happens in families? Ours is much the same.)

Roll up! Roll up! Blood Sisters is free!

Love in a Cold Climate