Today’s Dress of the Week (I’m impressed that I’ve managed to keep this feature going!) is John Galliano’s ‘Maria-Luisa’ dress from his S/S 1998 collection, which is perhaps one of the most gorgeously opulent dresses ever made. I mean, just LOOK at it. Amazing.

Okay, maybe you have to be a bit goth to appreciate it, but seriously just look at the size of it and those incredible flounces! John Galliano is one of my all time favourite designers (hey, I may look a bit scruffy but I can speak Fashion) because I adore the way that he is so heavily inspired by the fashions of the past, particularly the eighteenth century. 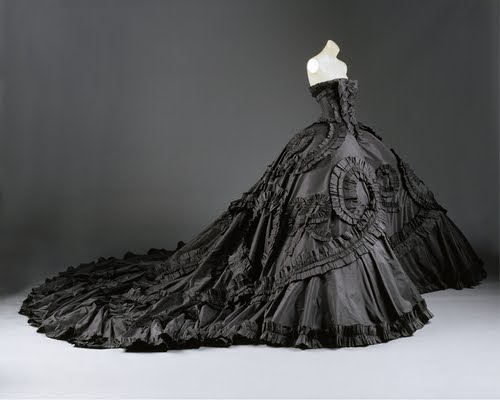 In this piece, I see a merging of the flamboyant gowns of the second half of the eighteenth century with the profound black of Victorian mourning. I love the eschelles (row of bows down the front of the stomacher – yes, of course there’s a name for them!) on the front of the bodice – they wouldn’t look out of place on one of Madame de Pompadour’s exquisite gowns.

Actually, thinking about it, this dress also reminds me of the black taffeta one worn by Princess Diana on her first public engagement. Although really I can more readily picture Madonna in this particular beauty… 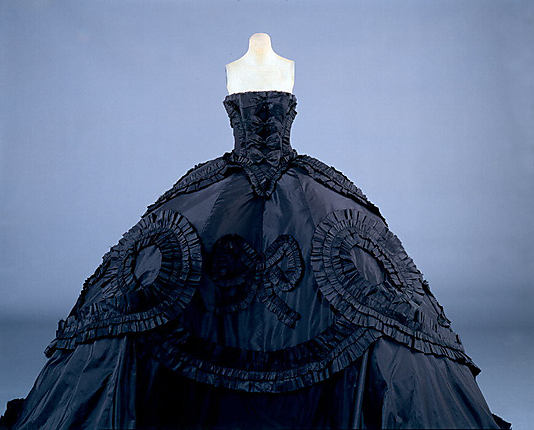 ‘In this design, John Galliano for Dior combined the elements of a robe à la française with the vast crinolined silhouettes of the mid-nineteenth century. The stomacher, open overskirt, and petticoat are expressly eighteenth century, but the huge wired cages that support the skirts over nine feet wide are constructed more like the hoops of the Second Empire than the discrete by comparison panniers of the ancien régime. While the eighteenth-century woman could at least sidle through a doorway, Galliano’s beauties, because of the depths of their skirts, would have to torque and deform their hoops to squeeze their way through.’ — Metropolitan Museum of Art website.

What do you think? Who would you like to see wearing this? Do you think you could carry it off?

A Dress for Diana – the Emanuels