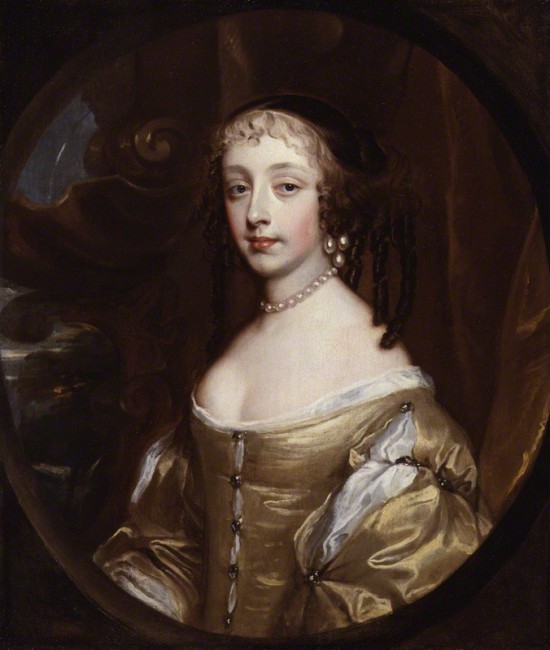 As you may expect of an Art History graduate like myself, the pages of my books are liberally filled with descriptions of paintings – in particular portraits of the characters themselves, painted by a whole plethora of wonderful artists from Van Dyck to Vigée-Lebrun to David.

was a particular joy in this respect as there are some wonderful royal portraits from the period that I was writing about and I thought I would share some of them with you today! 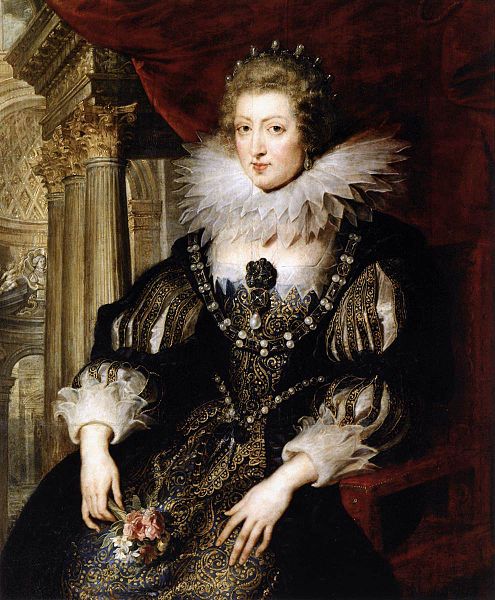 ‘Tante Anne bustles over to us, her plump white hands held out in welcome while her high heeled red leather shoes click imperatively on the polished parquet floor. She used to be a beauty once upon a time, when she first came to France as a little Spanish Infanta to marry Mam’s elder brother. I’ve seen portraits of her in her younger days, with softly curled blonde hair lightened and made more yellow by saffron water and wearing fabulous dresses encrusted with pearls, sapphires and diamonds. Like Mam, she only ever wears mourning nowadays but clearly delights in the way that her shimmering black satin and taffeta gowns trimmed with jet and pearls make her already fair complexion appear even paler and more luminous.’ 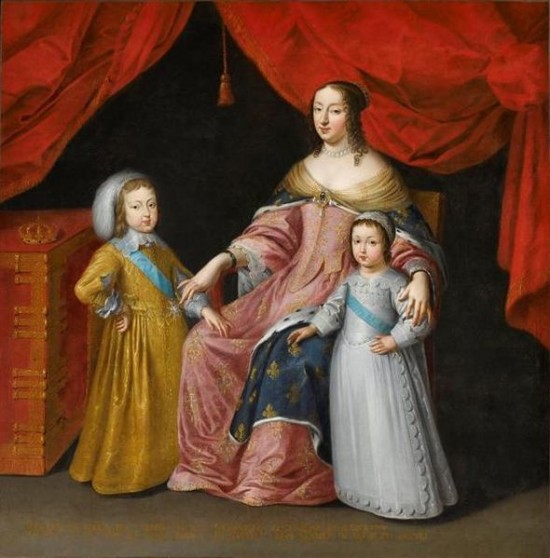 ‘‘Henriette-Anne, how tall you are getting.’ It’s a lie. I never seem to get any taller, but I’m grateful to her for saying so. ‘You are getting to be very pretty indeed.’ She embraces me, surrounding me with her sweet, spicy scent of carnations and leads me to her chair in front of the huge pink marble fireplace above which hangs an enormous portrait of her sitting proud as punch in pale pink silk with her two sons, who stand pop eyed in their little boy frocks on either side of her. I smirk a little at the way Louis is portrayed standing with his hand on his hip like a little Emperor, when he must have been about four at the time.’ 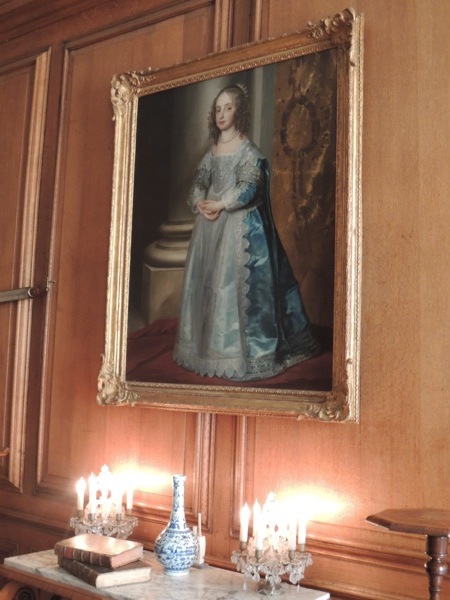 ‘There’s a painting in Mam’s closet of my elder sister Mary as a little girl, pensive and pale in pale blue satin with her hair arranged in soft auburn curls on either side of her face. It used to hang in pride of place in our father’s room when he was imprisoned at Hampton Court but after his execution Lady d’Aubigny, one of those courageous and highly coloured aristocratic ladies who have remained loyal to my family’s cause, cut it from its frame and smuggled it under her voluminous black silk skirts out of the country to Mam.’ 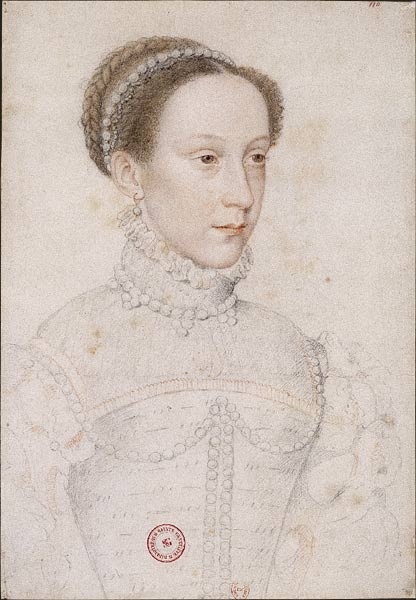 ‘We move in straight away, bringing with us cartloads of furniture and paintings donated by Tante Anne from the stores at the Louvre. And so it is that I sleep at night in a canopied bed that belonged to Mam when she was a girl, watched over by a small portrait of my ancestress, Mary of Scotland, painted shortly after she became Queen of France in virginal white with huge luminous pearls pinned in her red hair. Mam says that the portrait gives her the shivers but I like to have Mary’s pretty hazel eyes resting on me as I settle down to sleep. I know that she would never do me harm.’

(This isn’t an actual portrait but was based on the one above.) 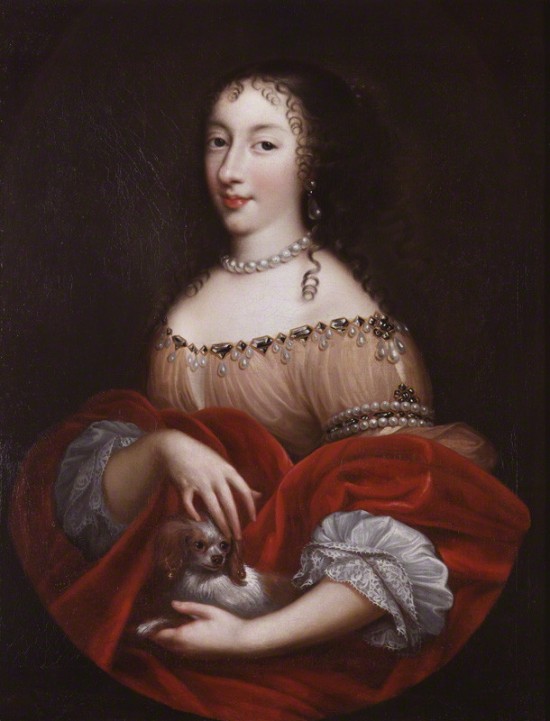 ‘For my fourteenth birthday, Louise sends a portrait completed from sketches she made of me before she left for Chaillot. I am delighted and hang it beside my little dressing table so that I can look at it every morning as my new femme de chambre, Madame de Bordes prepares me for the day and again at night as she brushes out my hair while I long sleepily for my bed.

Louise painted me in what she knows is my favourite dress of pale buttery yellow satin, with one of Mam’s spaniels wriggling impatiently in my arms. My gaze is direct and faintly amused, echoing the slight upwards curve of my red lips. There’s something wary about my expression though, as if I am keeping secrets that I long to share but dare not. ‘Louise has captured you very well,’ Mam says when it arrives wrapped in thick layers of wadded cotton. ‘You always used to pull that face when you had sneaked down to the kitchen and helped yourself to jam.’’

(Not an actual portrait but roughly based on the Mignard above.)

‘A huge painting arrives at court of the Infanta Maria Teresa and everyone rushes to see it after it is unveiled with a great deal of ceremony in one of the long galleries. The vast crowd gathered around it parts out of the way and watches me as I walk towards it, carefully schooling my face so that I look both interested and unconcerned. This is no easy matter but I am determined that no one will know how much I care.

I look carefully at the portrait, which is full length and dominated by the Infanta’s enormous cream and gold silk hoop skirts which seem to take up most of the canvas space. Otherwise, Mam was right about her nose and cheeks while her prominent blue eyes, pouting red lips and dark blonde hair, which has been elaborately arranged on wires so that it sticks out in rigid ringlets either side of her head, make her look like an unkind caricature of Tante Anne. I peer more closely at the painting, this time noting her double chin, the shy uncertainty of her gaze and, more absurdly, the silly little rows of peach bows, each with a perfect diamond drop suspended from it, that hangs from each wing of hair.’

(Not the actual portrait but based on this iconic one by Velazquez, which was probably very similar to the one sent for Louis’ perusal when the betrothal negotiations were ongoing.) 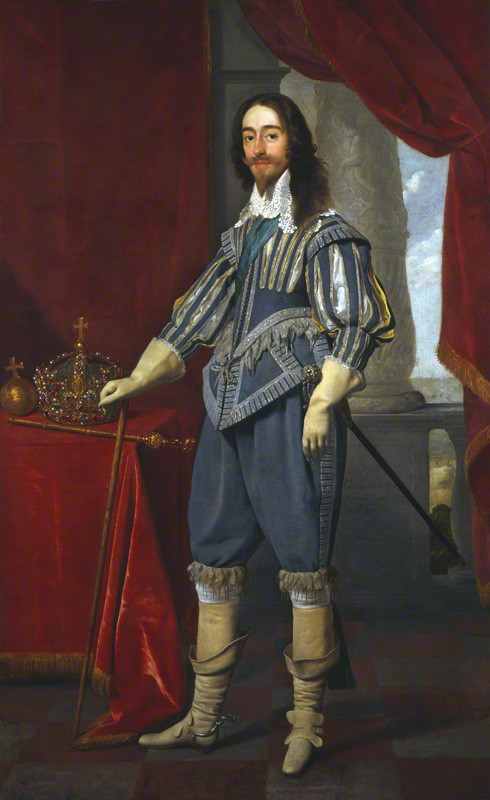 ‘Her smugness is almost unbearable when just a few days later, Tante Anne arrives in all her state at the Palais Royal to formally request my hand for her son. She sends a message on ahead to let us know her intent so that when she arrives, Mam and I are both ready and waiting, dressed in our finest gowns and looking poised and serene in our chairs in our newly fitted up presence chamber, which now has a large portrait of my poor sainted father hanging on the wall opposite the windows, which are hung with brand new crimson brocade curtains, all bought with Charles’ money. I see Mam’s eyes flutter more than once to his painted face and as her lips move, I guess that she is asking him to give her strength, to bless my betrothal, to forgive us all for carrying on without him.’

(Not an actual portrait but I based it on this one by Mytens.) 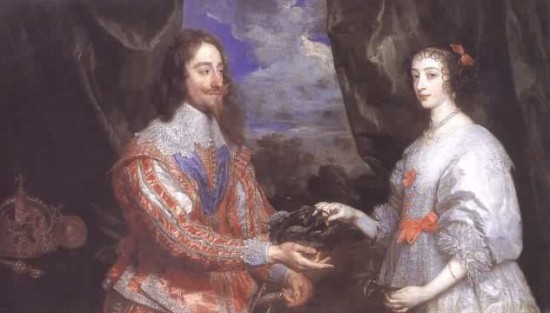 ‘Mary takes me to the suite of rooms that will be mine during our stay, they’re lit by hundreds of candles which burn on polished silver sconces and cast deep shadows across the wooden panelled walls. ‘Charles had them decorated specially for you,’ Mary says with a smile as she leads me into my bedchamber, which is hung with deep pink taffeta at the windows and around the elaborately canopied bed. The ceiling has been freshly painted with plump mischievous cherubs flying around a perfect blue sky. Over the plastered and gilt decorated fireplace there hangs a lovely portrait of my parents together. My father is wearing a red and white doublet and leans with an almost amorous look towards Mam, looking younger and prettier than I have ever seen her, as she hands him a laurel wreath. However, while father’s gaze is fixed firmly on my mother’s charming face, she looks out of the painting with a wry smile dancing about her pursed lips.’

I hope you enjoyed that! Minette‘s sales are now nearing the 3,000 mark which is just astonishing really seeing as it was only released in April. It’s had such lovely reviews too – please do keep them coming as I really appreciate them! Hopefully the sequel, Madame should be out next spring and if all goes to plan, it will be even more gloriously over the top than the original.

I should probably do a post like this for The Secret Diary of a Princess: a novel of Marie Antoinette

as well, shouldn’t I? 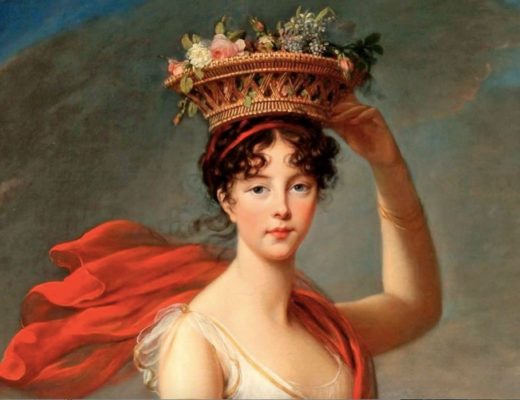