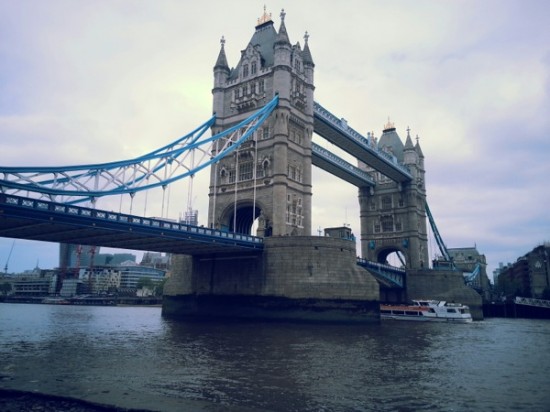 I’m afraid that there’s not a proper writing update this week as it was half term here so I got absolutely nothing done thanks to a combination of fine weather and demanding children. However, it’s not been a total loss as I not only managed to come up with a title but I also went on a fantastic research trip to London yesterday.

The main point of yesterday’s visit to London was to take part in something called The London Job, which basically involves a gang of Ripperologists going on an epic walk to look at obscure sites related to Victorian murder and mayhem. It was my first London Job and I have to say that I wasn’t at all disappointed as yesterday’s walk took us from Tower Hill, across Tower Bridge to the little beach off The Clink where one of the bodies in the ‘Thames Torso’ case was washed up then on a massive loop around Bermondsey that took in the site of Fagin’s den, Marshalsea Prison and so on before returning to Whitechapel. I was exhausted by the end of it! However, being a bit annoyingly indefatigable when it comes to epic walks around cities (ask my husband!), I was raring to go again after I’d had dinner at Wagamama so off I went again to reacquaint myself with some places I have mentioned in The Ripper Book. 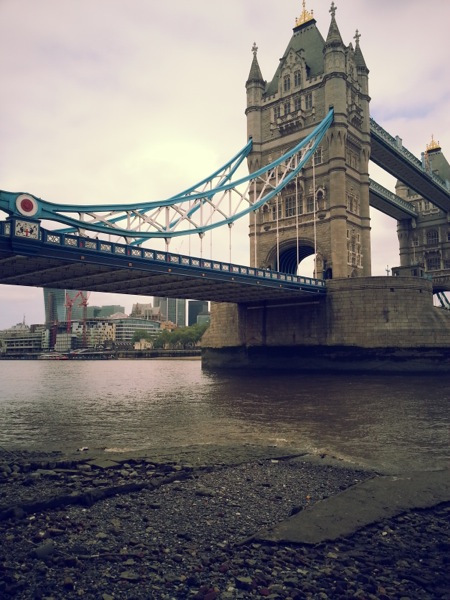 London Bridge, taken while standing on the beachy bit where one of the Thames Torso victims was washed up on the 4th of June 1889.

As I have said before, I don’t like to write about places that I have never visited although obviously the lines are blurred when it comes to historical fiction as, well, the past is a different country and also, in the case of Whitechapel in particular, things have changed so much that it’s often hard to imagine how it must have been back in the 1880s. However, on this occasion I was assisted by a couple of great guides, namely Neil Bell and Mark Ripper (no relation) both of whom were able to help me throw fresh light on what the murder scenes and streets would have looked like when the Whitechapel Murders were going on. In fact, Neil, who is an expert on Victorian policing, even took me on the beat of the policeman who discovered the body of Catherine Eddowes, which was absolutely amazing and totally fascinating.

Anyway, here’s some photos from the day along with a few relevant quotes from the book. 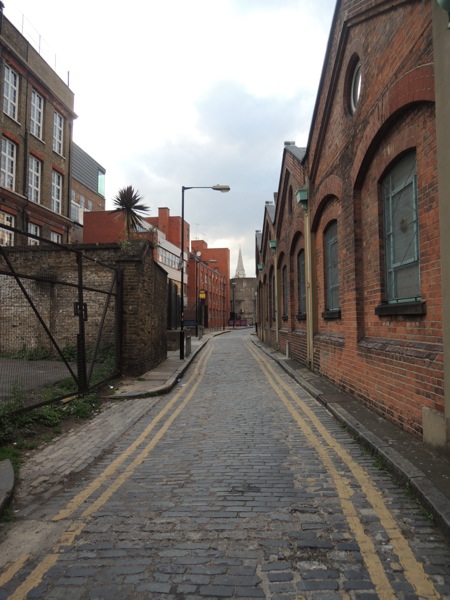 Gunthorpe Street, formerly known as George Yard and the scene of Martha Tabram’s murder in August 1888, looking up towards Wentworth Street.

‘There’s been a woman knifed in George Yard,’ Ned whispered with relish, leaning so close that his lips almost grazed my cheek and he jumped back in embarrassment. ‘Nasty business by all accounts. Stabbed over and over again.’

I was wide eyed now. I knew George Yard, which despite the misleading name was actually a narrow street and not a yard at all, well as I often used it to get from Brick Lane to Whitechapel High Street, where it came out as an archway between a pawnbrokers and the distinctly down at heel White Hart pub with its grimy bow window. It was a dingy ill lit alleyway, lined with cheap lodging houses and stinking of urine, rubbish, horse manure and the foul smoke generated by the tall chimney of the Whitechapel Board of Works’ rubbish incinerator on the corner of Wentworth Street. Most would take pains to avoid it at night but it was safe enough during the day, mainly thanks to the presence of a large ragged school for poor children at the Whitechapel High Street end.

Ned looked at me in amazement. ‘Course she’s dead,’ he said as if to a simpleton. ‘She’s been stabbed all over.’ 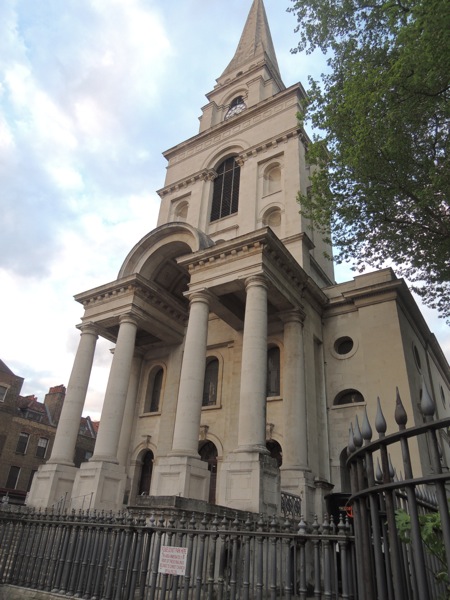 With a shudder, our carriage started moving again, gradually picking up speed as it turned on to Commercial Street. In the distance, if I angled my neck sufficiently, I could make out the tall angular spire of Hawksmoor’s Christ Church, looming white and faintly sinister over the smoking chimneys and grimy roofs of Whitechapel. For some reason the sight of it made me feel oddly uneasy, maybe because its austere beauty looked so out of place in such squalid surroundings – it ought really to have been presiding over Westminster or Kensington rather than one of the most down at heel corners of the capital. 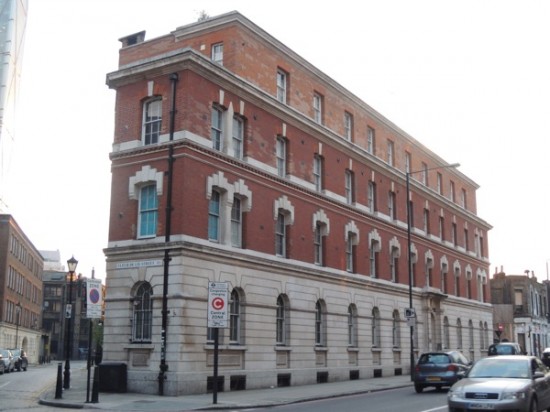 The former police station on Commercial Street, Whitechapel. My great-great-great grandfather lived here with his family in the 1880s and it was here that he was primarily based during his policing career.

‘This is the police station,’ Aunt Minerva said, pointing with her gloved hand to a tall wedge shaped building that stood on a corner. ‘God knows they need it. I’ve heard that some of the streets around Christ Church are so violent and riddled with criminality that the policeman are required to enter them in pairs lest they be attacked and woe betide anyone who enters them alone.’

I looked up at Whitechapel police station, smiling when I noticed that someone had put some small terracotta pots of red geraniums out on a window ledge. As I looked, the window, which had been painted a bright cheerful blue inside was pushed up and a pretty girl with long plaited red hair popped her head out before producing a small battered tin cup which she used to water the flowers, giggling a little as some of the water spilled over the ledge and splashed a woman walking underneath. 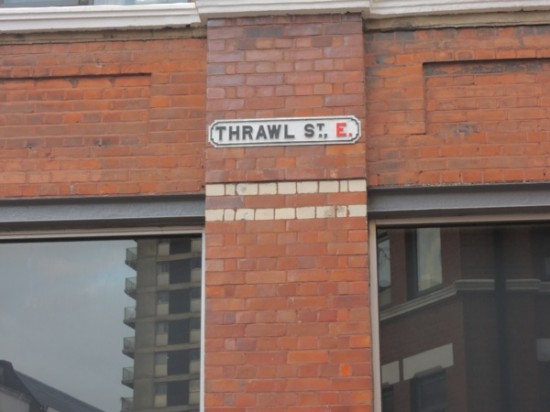 Next to nothing remains of Thrawl Street as it was in 1888 as it’s been replaced by a modern housing estate.

I crossed the road further down, darting between a couple of carters who were close to having a full on brawl about their right of way on to Whitechapel High Street then carried on to Thrawl Street, a miserable thoroughfare lined with smoke blackened dilapidated houses, most of which were in use as cheap lodging houses where anyone with fourpence could pay for a bed for the night and the use of a dingy little kitchen. The atmosphere, never exactly jolly at even the best of times, was unusually sombre as I headed straight for number eighteen, probably because the police, who were intensely distrusted and disliked in this corner of Whitechapel, had come knocking earlier on, an event that would almost certainly have driven virtually every resident of the street indoors so that the only sounds to be heard were the insistent hungry wail of a baby from an upstairs room and the barking of some dogs chained up in the overgrown backyards. 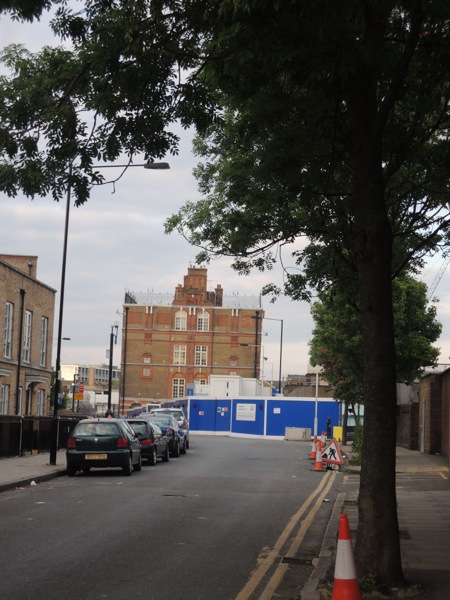 The view down Durward Street, formerly Buck’s Row, as it is now.

I gave it one last wary look over my shoulder as I turned off Whitechapel Road on to Thomas Street and then took the first right on to Buck’s Row, a narrow cheerless road with looming dark brick warehouses running down one side and a tall ominous looking school building, a length of brick wall and a row of squat little two storey cottages on the other. There was no need to ask anyone where Poll’s body had been found as there was still a crowd gathered around a spot on the narrow pavement in front of a pair of tall wooden gates next to the cottages and directly across the way from a solitary street lamp. She really had been left out in the street for all to see. 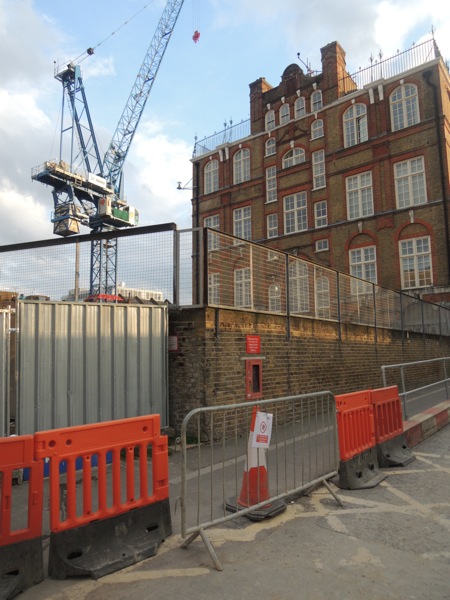 The spot where Polly Nichols’ body was found in August 1888.

The ground shuddered beneath our feet as a train passed underneath us, creaking and rumbling along a railway line that was hidden from view by the brick wall next to the gates and its fellow on the opposite side of the road. I felt a bit foolish now as I’d assumed the wall was concealing the board school playground when in fact it was hiding the sheer drop down from the bridge that we were unknowingly standing on.

‘The playground is up on the school roof,’ I heard someone mutter behind me to their friend who had made the assumption as me and I looked up again at the board school, a four storey red brick monolith with, I now saw, tall metal railings lining the roof to prevent the children falling over the edge. ‘They could have had one on the ground if it wasn’t for the bleeding trains.’

The crowd started to melt away then, finally satisfied that there really wasn’t anything much to see and that they wouldn’t feel any closer to what had happened or have any better understanding of it by being there. I lingered for a moment longer though, straining my ears to hear the distant racket of Whitechapel Road in one direction and the rumble of trains from the other and gazing up at the warehouses that presided menacingly over the squalid little road. Even by Whitechapel standards, this was a miserable place to die. 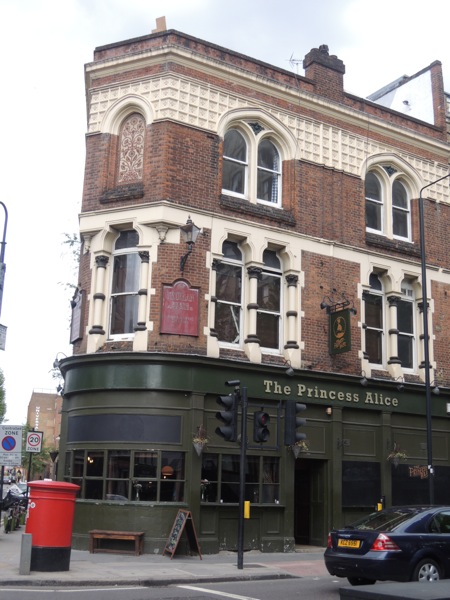 I couldn’t not post a picture of my favourite pub, which is of course the Princess Alice on Commercial Street. I should probably give it a couple of scenes in the book actually!

And there we have it. I’m now planning another, even more thorough research trip for sometime in August, which should coincide with the book being almost complete! Which is good news for all you Minette

fans (can you believe that 2,500 copies of Minette have now been sold since I released it in April?) as I’m starting work on the sequel, Madame as soon as it is done.

Oh yes and that title? It’s From Whitechapel, which will make absolute sense very quickly to anyone that reads it and is, of course, a nod to the infamous ‘From Hell’ letter allegedly sent by a certain Mr Jack T Ripper.