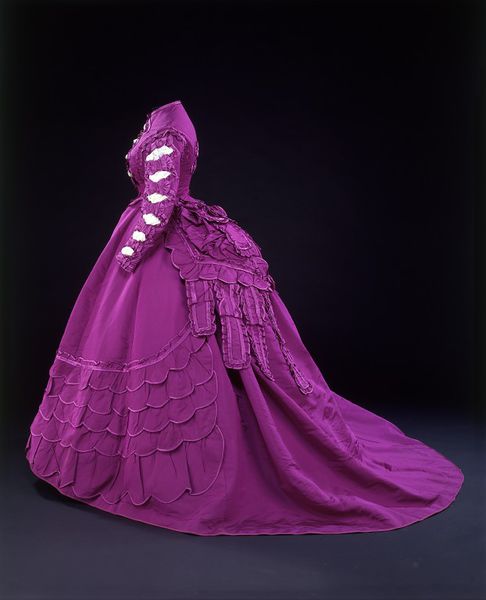 Isn’t this the most fabulous dress? I just love its vibrant magenta colour, it’s so bold and dramatic and sumptuously romantic. I couldn’t wear it though as it would clash horribly with my hair!

This gown was made in around 1870 by Madame Vignon, one of the most fashionable couturiers in Paris, who was a great favourite of the ultra stylish Empress Eugénie. The vivid hue is the result of the amazing new synthetic aniline dyes that came into use in the late 1850s thanks to the experimentation of Sir William Henry Perkin who accidentally discovered the first synthetic dye in 1856 while an eighteen year old Chemistry student in London. He was actually trying to develop a synthetic alternative to the anti malaria drug quinine but swiftly ditched this when he realised that his experiment had produced a vivid purple shade.

The first dye, as discovered by Perkin was a particularly lurid hue of violet, which he immediately and with enormous foresight for a science geek sort, patented as ‘aniline purple’ although it would become better known as ‘mauveine’ or simply ‘mauve’. He also set up a dye works in London to produce huge quantities of his amazing mauve dye. It must have seemed completely mad to him that he had managed to invent a whole new colour while trying (and failing!) to create a medical treatment. Isn’t science ace? 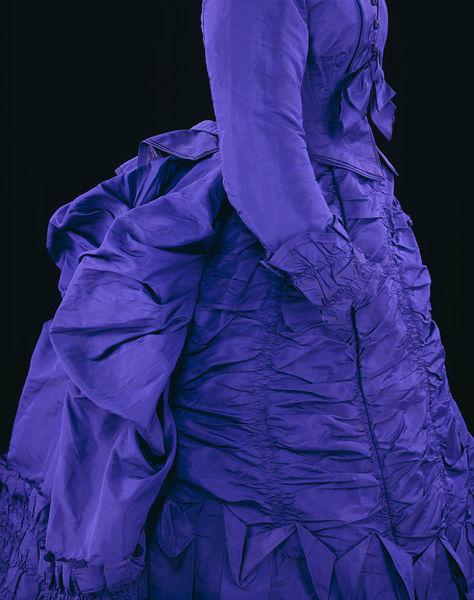 Perkin’s accidental discovery not only revolutionised the dying process but was also a breath of fresh air as far as the fashion world was concerned as women rushed to buy dresses in this amazing bright new colour that was so eye catchingly different to the rather more restrained natural shades that they would usually be expected to wear. Even Queen Victoria wasn’t immune to the new passion for aniline purple and appeared at the 1862 Royal Exhibition in a gown of vivid mauveine (and as we know her granddaughter, the Empress Alexandra of Russia would be a massive fan of the colour mauve). In fact, so prevalent was this new passion for purple that in August 1859, Punch mocked the trend as ‘Mauve Measles’ and mauve was just the start as well as it was swiftly followed by virulent and retina searing shades of green, blue, yellow, pink and red. 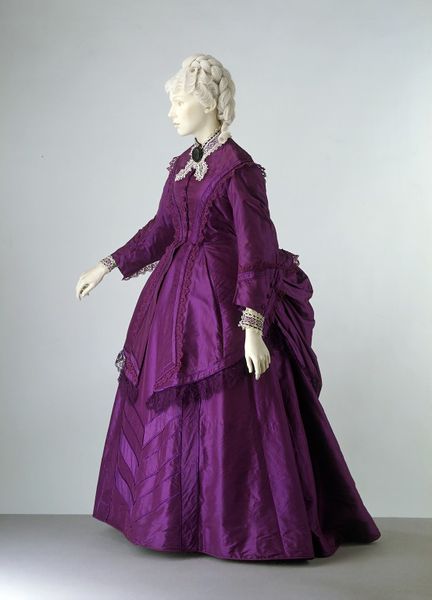 Magenta gown, UK, c1870-3. Photo: Victoria and Albert Museum, London. This dress was worn as a wedding dress by the donor’s mother, which reflects the trend at the time for many women to wear a ‘best’ dress for their wedding rather than the increasingly common white ensemble.

As might be expected, the new garish hues became extremely popular with modish ladies everywhere, although such gaudy colours were inevitably regarded as rather vulgar in aristocratic circles although one way to combat this, as recommended by The Englishwoman’s Domestic Magazine in March 1868, was to lighten the eye catching brightness of the colour by adding touches of white, black and grey to add a touch of sobriety. 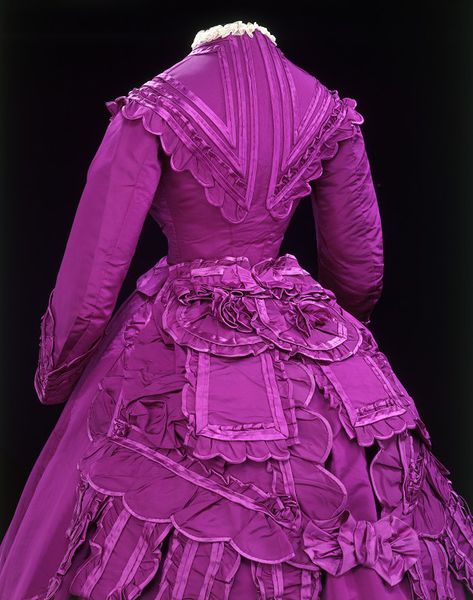 It wasn’t all jollity though – after some controversy arose about the safety of synthetic dyes, a German chemist tested fabrics dyed with magenta in the early 1870s and found that they contained traces of arsenic and there were also increasing reports of clothes dyed in this way causing skin conditions as the dye leaked out as a result of perspiration, rain or just general domestic laundry practices. However, the popularity of aniline dyes continued and eventually the dye would be approved as food colouring, while aniline itself would go on to be developed as an analgesic drug so not only did Perkin kick off a massive passion for purple but he also saved lives as well! Shame about the quinine but hey.

Of course, mauve as we know it now isn’t quite so vivid – the reason for this is that mauveine faded really quickly and soon lost its brightness to eventually become a more dusky blue purple, which is what we nowadays know as mauve.

As part of my new resolution to blog every day, I’m going to be posting about a different ‘dress of the week’ once a week from now on. I’ve wanted to post about these amazing (and rather virulent!) dresses for ages so this seemed like the perfect piece to kick off with!