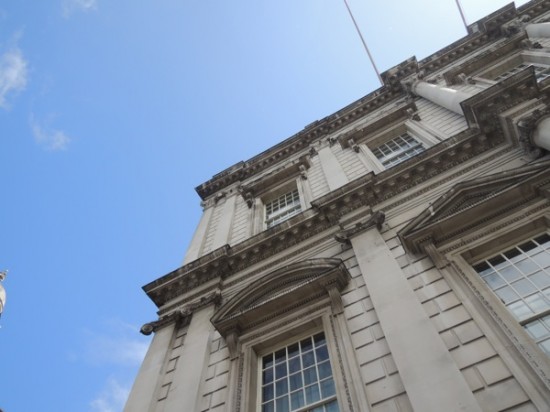 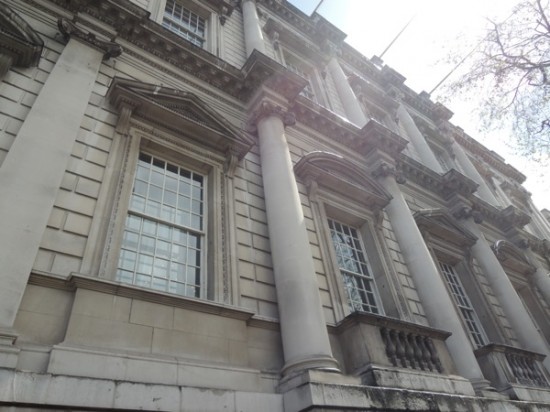 After feasting my eyes on the delights of In Fine Style in the Queen’s Gallery, I headed off by foot to Whitehall in search of the Banqueting House, where I intended to continue my day of Stuart frolics.

Surprisingly, I had never been to the Banqueting House before even though I know more than anyone could ever wish to know about its construction and interior thanks to all my years spent intensively studying History of Art at sixth form and university. I really ought to have visited it before now though, especially as one of, I think, the most important scenes in Minette

is set outside. I don’t know about you, but I don’t really like to write about places that I have never visited (making allowances of course for the fact that I write historical fiction and the past, as we all know, being a foreign country) as I don’t think you can get a full and proper idea of a place just from Google Earth. I need to see it with my own eyes. 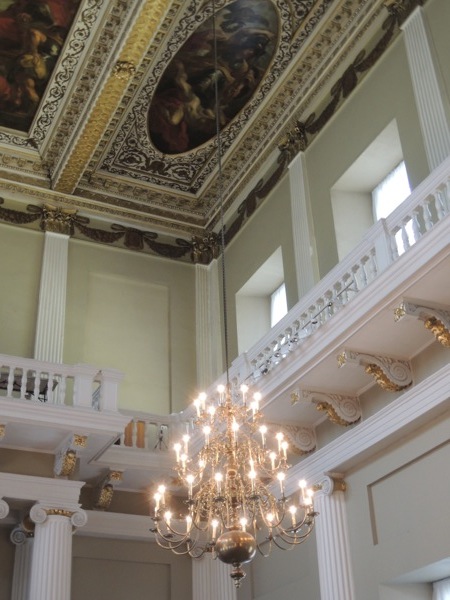 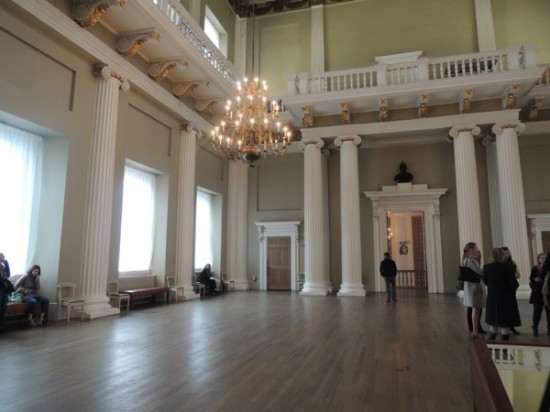 Construction on the Banqueting House began in 1619, when it was intended by James I as a suitable place to hold the splendid court masques, receptions and entertainments that his court was so noted for. Designed by Inigo Jones, it is laid out in typical Palladium style with a long double cube room at the heart, perfectly sized to hold both a court audience and performers. It’s a beautiful space, airy and elegant and would have made a striking contrast to the rest of Whitehall Palace, which had been around since Tudor times and was a ramshackle and often confusing collection of higgledy piggledy red brick buildings, stylistically more akin to Hampton Court Palace than the beautiful palazzos of Florence, which were the inspiration for the Banqueting House.

The perfectly proportioned room is a setting though for the jewel that is Rubens’ amazing ceiling, which was commissioned by James I’s son Charles I after his death and depicts his father in various aspects of glorification, with the wonderful ‘Apotheosis of James I‘ (which depicts James I being called to Heaven) as the centre piece, flanked at each end of the hall by ‘The Union of the Crowns‘ (which celebrates the union of the English and Scottish crowns and shows Hercules beating Envy on the right and Minerva berating Ignorance on the left) and ‘The Peaceful Reign of James I‘ (which shows James as a peaceful and wise king, surrounded by personifications of Peace, Plenty, Abundance and Reason, who triumph over Avarice and Intemperate Discord). 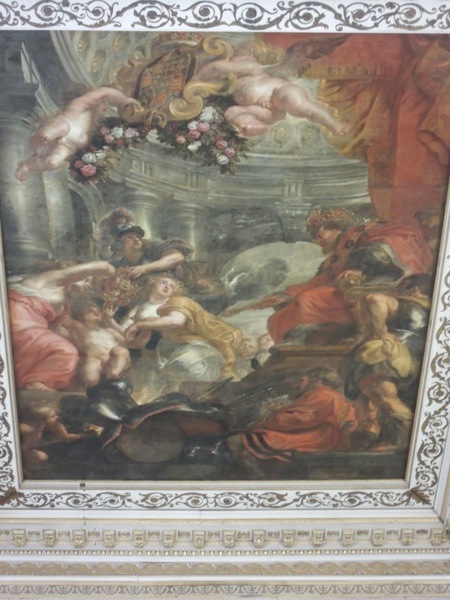 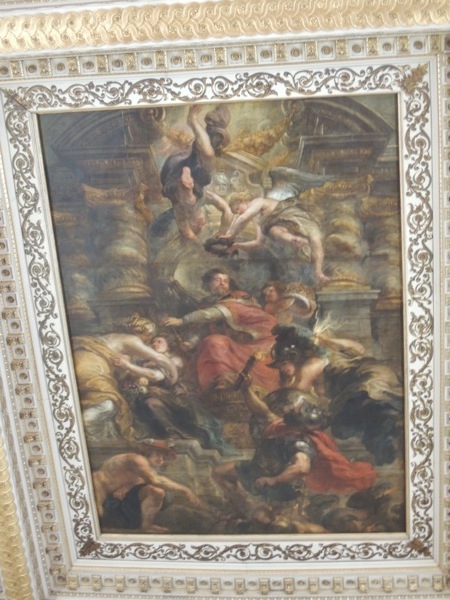 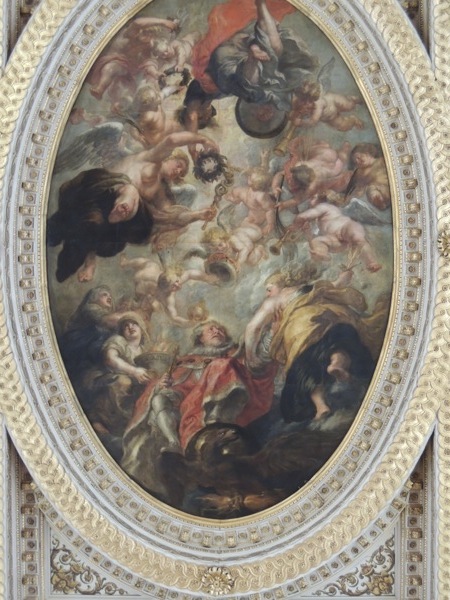 During the reigns of the Stuart monarchs this space would have been used for all the most splendid court entertainments and events like the reception of foreign ambassadors or banquets to celebrate royal weddings. It was here that James I received Pochahontas in 1617 and was so unprepossessing that she had to ask which of the men present was the king. It was also here that his daughter in law, Henrietta Maria danced in whimsical court masques, in lavish costumes designed by Inigo Jones.

Of course the most famous event in the Banqueting House’s history is the execution of Charles I, which took place outside on the 30th January 1649 in front of an immense crowd that had gathered in Whitehall for the occasion, a stone’s throw away from where Downing Street and Trafalgar Square are now. The king was brought by foot from nearby St James’ Palace and crossed the main hall of the Banqueting House on his way to the window through which he would step out on to the specially erected scaffold. 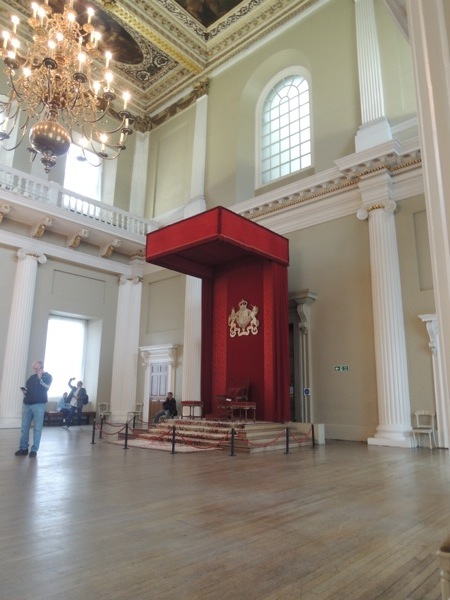 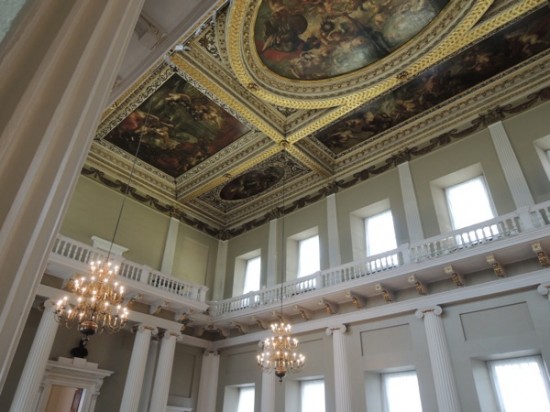 There is of course an immense irony to the fact that one of the the unfortunate Charles’ last sights on earth would be the paintings that he had commissioned Rubens to create in honour of his father’s Divine Right of Kingship and the peacefulness of his reign.

I’ve read conflicting accounts about which window Charles I, dressed in his extra shirt so that no one would spot him shivering with cold and think that he was afraid, stepped through to get to the scaffold, ranging from one of the central ones leading out from the main hall to one above which he would have reached by walking around the gallery that runs around the top (this isn’t a musician’s gallery but was instead used by less important court hangers on who could stand here to watch the festivities below), which would have meant that his scaffold would have had to be dizzyingly high as the main hall is reached by stairs. 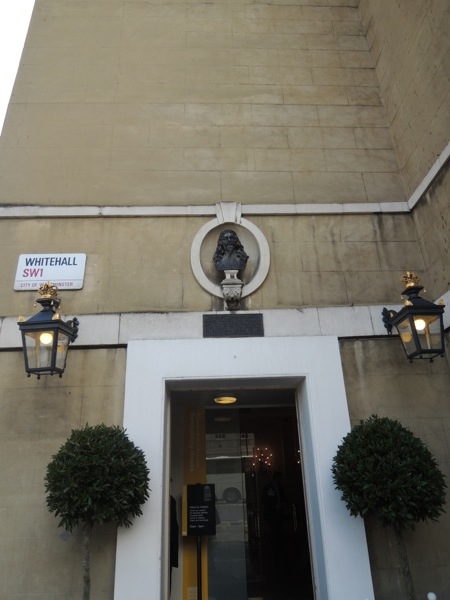 The official line, however, is that the scaffold was reached via a now completely bricked up window that was originally on the first landing of the stairs up to the main hall and which, if it still existed today, would be just above the now main entrance to the Banqueting House as shown in the photograph above. This would have involved a very low scaffold though, so I personally am inclined to think it was one of the central windows from the main hall.

Visiting the Banqueting House today is a bit of an odd experience – it’s a beautiful space, no doubt about that but a curiously empty one where visitors mill about beneath Rubens’ beautiful ceiling and try to find some meaning in the major historical event that happened here, assisted by the great but rather discreet display about Charles I’s execution on the stairs. I think it needs something more though – if I had my way, I would try to bring to mind the lavish and really quite extraordinary court masques and entertainments that were held here, with the mad fashions enjoyed by the Jacobean court (they had some amazing mannequins in paper Georgian costumes in the new exhibition at Hampton Court, which would look brilliant in the Banqueting House as well) and the beautiful music that flourished during the period. Actually, after the beauty of the building, that’s what struck me most – there should have been music playing.

Ultimately though, perhaps the melancholy emptiness and almost reverent hush of the Banqueting House is better though. Certainly, it seems to be an excellent place for silent contemplation, broken only by the buzz of the infernal audio guides and the trundle of people pushing wheeled mirrors along the parquet floor in order to look at the beautiful ceiling. 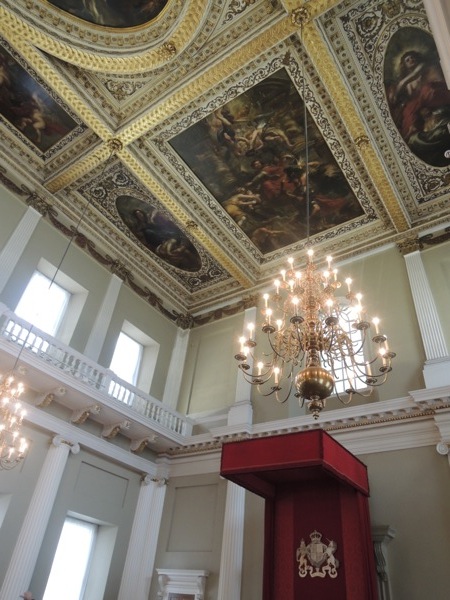 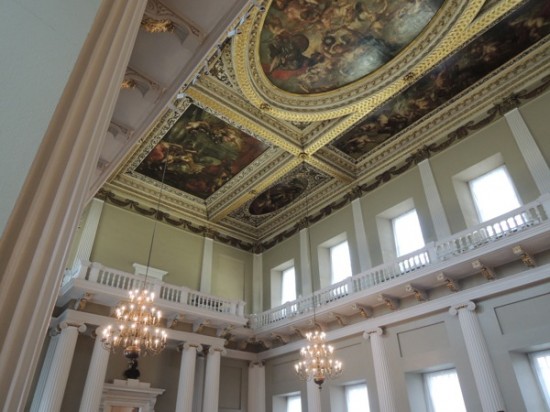 If you’re at all interested in the Stuarts then I’d definitely recommend a visit. Entry for adults is just a fiver, while children under sixteen are free and it’s open every day from 10am until 5pm. I’m told that there will be an evening performance of a masque at some point over the summer, which I would love to attend. How amazing.

Thanks so much for all the entries to the Robe competition! I have fired up a Random Number Generator and the winners are Kerry from Planes, Trains and Plantagenets and Hester! Thanks so much for commenting, everyone! It was so nice to see so many long time readers commenting for the first time – please come back again! If you weren’t successful this time, they are now selling copies of Robe on the Royal Collection website.

, my novel about Henrietta-Anne Stuart, youngest daughter of Charles I and favourite sister of Charles II is out now for Kindle. It’s got more posh doom than you can reasonably shake a stick at and is apparently rather good too.

In Fine Style - a superb Tudor and Stuart exhibition