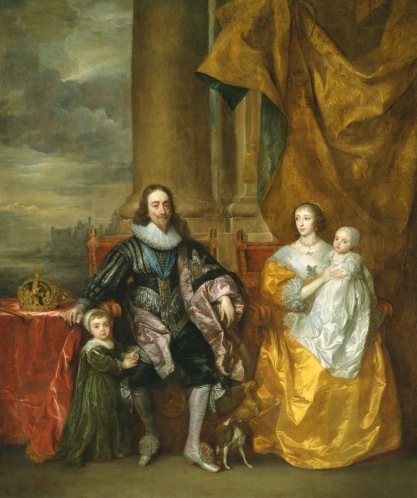 I’d have to say that one of the best things about writing a novel featuring the dashing mercurial and rather tragic family of Charles I and Henrietta Maria is getting to look at the gorgeous portraits of Anthony Van Dyck, who was born on this day in 1599.

Although Van Dyck is probably best known for his wonderful paintings of the fabulously dressed ladies of Charles and Henrietta Maria’s court with their rich, rustling silks and satins and their feathery pearl bedecked ringlets, it is his paintings of the royal children that I find the most compelling and also, perhaps the most sad, depicting as they do a happy and affectionate close knit family on the brink of being torn apart and separated by war. 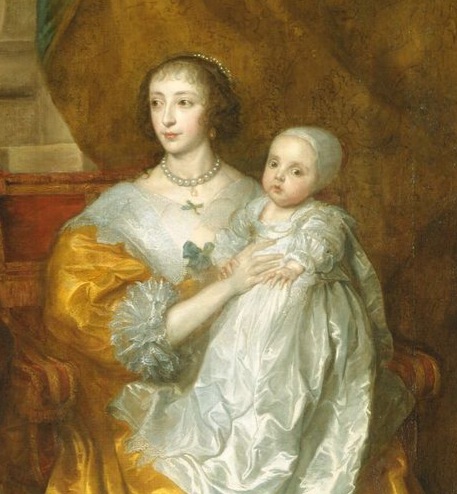 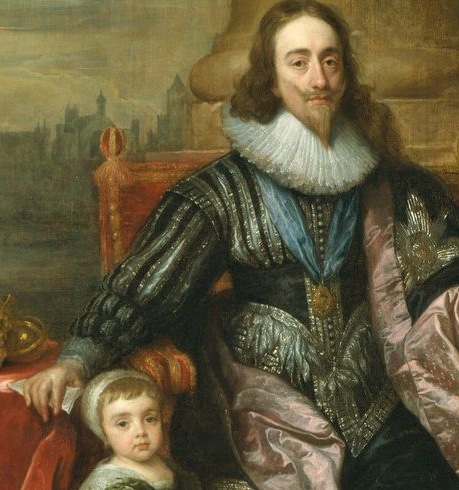 I love this painting of Charles, Henrietta Maria and their two eldest surviving children, Charles and Mary, it manages to pull off the almost impossible feat of being both stately and affectionate at the same time. There are many parallels between Henrietta Maria and her husband’s ancestral niece, Marie Antoinette and I would say that one of them is that they were both fortunate to enjoy the work of portrait artists capable of combining majesty with humanity, even though both also sacrificed a truthful likeness in their pursuit of a romantic ideal.

Henrietta Maria’s egg yolk yellow satin gown is charming though, as is the gaze, both fond and also faintly amused that she directs at her rather more ill at ease husband. Charming too is the toddler Prince of Wales who stands at his father’s knee and stares out warily at the viewer.

As with Vigée Lebrun’s stately painting of Marie Antoinette and her children, this canvas was hung in prominent display at Whitehall, there to reinforce the notion of the royal family as a powerful force to be reckoned with both domestically and in matters of state. 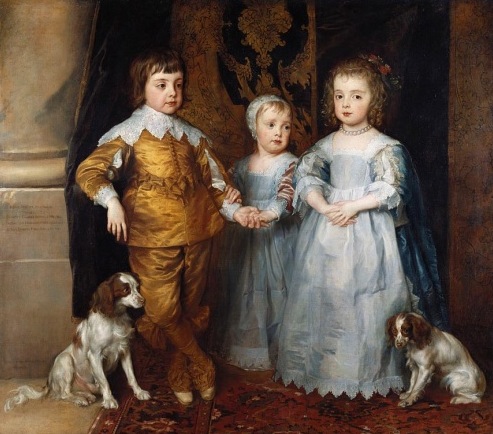 This beautiful painting dates from a couple of years later when the royal family had been swelled by the addition of Prince James, who is clearly extremely close to his elder brother Charles, who lounges very much at his ease in his new saffron yellow big boy trousers which had recently replaced the skirts of childhood that were worn by both sexes. 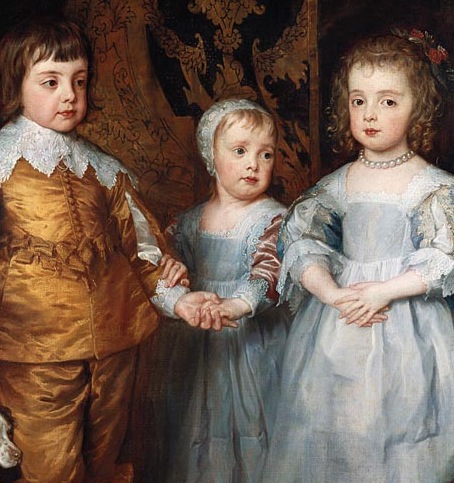 Princess Mary was her father’s favourite child and you can see why as she is absolutely delightful in these paintings with her candid wide eyed gaze and prim little smiles. Like her elder brother, she also wears a childlike version of the elaborate gowns that would have been worn by her mother, only with the addition of a long lawn apron to protect against the natural spills and mess of childhood. 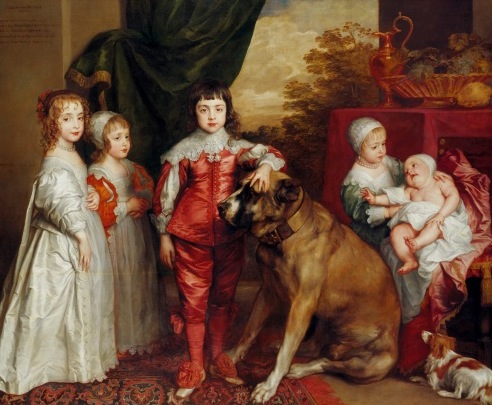 This is perhaps the most ambitious of the royal portraits completed by Anthony Van Dyck, featuring as it does that most dreaded combination of both children and animals. Of course, he didn’t paint all of his sitters at once but instead worked from individual sketches such as the surviving one of the Princesses Elizabeth and Anne on the right hand side of the canvas. 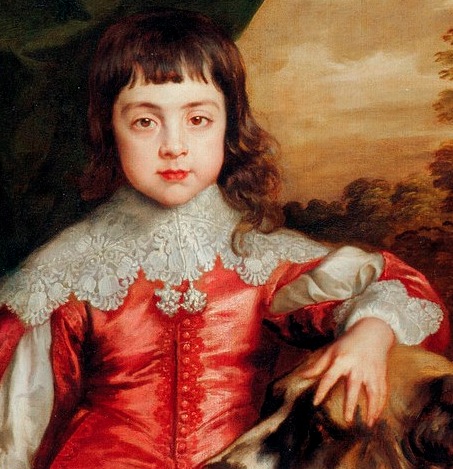 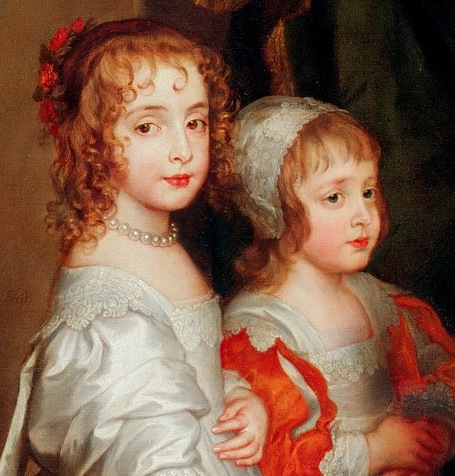 Although this combination of childhood and rank is something we are accustomed to thanks to the informal portraits of George III and Queen Victoria with their families, at the time it was considered rather ground breaking as previously royal children had been depicted as stiff, unsmiling little miniature adults as in the tense portraits of Henry VIII’s children as pale, thin lipped adolescents.

As you might expect from a monarch who would eventually flounder because of his strict belief in the mystical Divine Right of Kings, part of Van Dyck’s remit was to emphasise the rank and lofty destiny of his children but there is an informal touch here as well which underlines their youth and individual characteristics from mischievous Mary with her impudent sideways look to nervous James to Charles, confident and bold and capable of calming the great dog at his side with the lightest of touches. 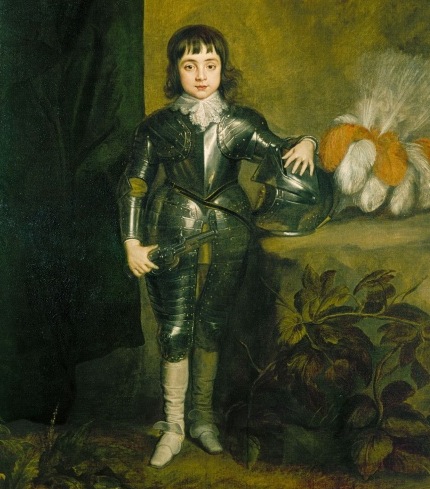 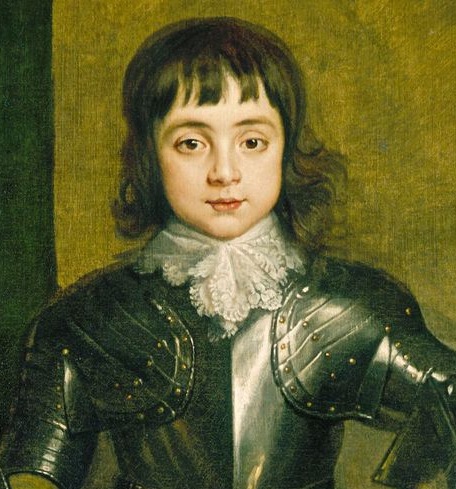 This painting of the young Charles II is perhaps the saddest of all, depicting as it does the seven year old prince looking hopeful and at the same time rather timid in a full set of armour, obviously completely unaware that within five years his family would be plunged into a devastating war that would lead to his father’s execution, the imprisonment of his siblings and separation and exile of his family as well as his own long years as a dispossessed King.

Van Dyck was only responsible for the face in this portrait, which was probably based on the works produced during sittings for the 1637 portrait of the royal children and was commissioned by Henrietta Maria who could never quite reconcile herself to her eldest son’s dark ‘ugly’ (according to her in her letters to her sister Christine) looks which had ironically been inherited from her own half Italian Medici lineage. The other royal children had the red hair and fair complexions of their Stuart ancestors, most notably their great grandmother, Mary, Queen of Scots. 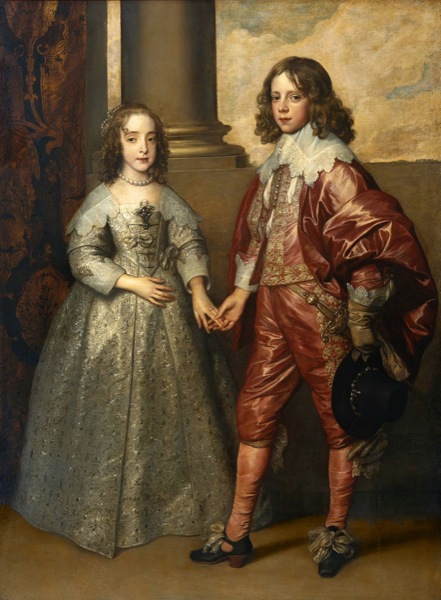 I think this portrait of the Princess Mary and her fiancé William of Orange, painted to commemorate their marriage in 1641, is quite possibly my most favourite of Van Dyck’s paintings. I’m a big fan of vivacious, pretty Mary anyway and can’t imagine anything more delightful than this depiction of the nine year old princess in her beautiful silver tissue wedding dress hand in hand with her fifteen year old groom. Okay, that’s a bit weird but they look so sweet together and I think her expression of shy pride is brilliantly captured.

This portrait of celebration, royal union and dynastic destiny was to mark an end to the royal portraits of Van Dyck as he was to die in December of that year, just in time to miss the outbreak of the English Civil War and sad fate of his sitters. Of course from an entirely selfish point of view, I wish that he had lived long enough to paint the Princess Henrietta Anne, the subject of my next novel, but ultimately I’m just grateful that he existed at all as his work has given me and so many other people untold pleasure over the years.

Yet another weekly round up…

A sight to gladden any author's heart...

Yet another weekly round up...