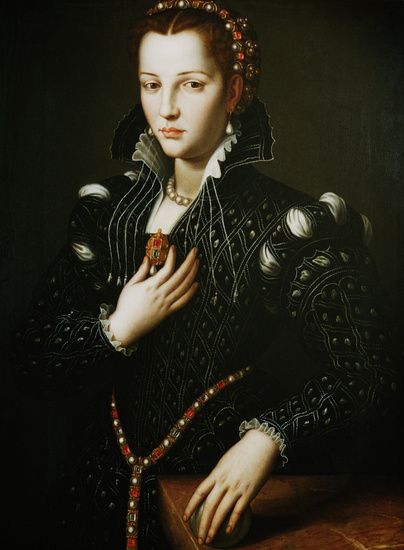 If you thought today’s post was going to be all about some fluffy big romance from history then, frankly, you don’t really know me at all. In fact, who are you and what are you doing on this blog?

Today’s sad princess is Lucrezia de’ Medici, youngest daughter of Cosimo I and his enigmatic Spanish wife, Eleanor de Toledo. Lucrezia was born in Florence on Valentine’s Day in 1545, the fifth child of the eleven born to Cosimo and Eleanor between 1540 and 1554.

Despite the vast wealth enjoyed by the Medici family, Lucrezia and her siblings actually enjoyed a relatively simple upbringing albeit in the splendid surroundings of the Palazzo Vecchio, Palazzo Pitti and various villas in the Tuscan countryside, which the family would retreat to when the heat of summer made Florence intolerably and unhealthily hot. Although one might expect the children of Cosmo I to live in sumptuous bedchambers, attended by fleets of servants and dressing in cloth of gold on a daily basis, the reality was very different as they were actually raised in very close quarters, sharing beds and wearing and playing with hand me downs from the eldest children, Maria and Francesco, who were usually the only ones to get anything new albeit of the finest quality to ensure its longevity.

Being somewhat obsessed with fashion (who can forget the astonishing gowns she wears in Bronzino’s portraits) Eleanor de Toledo took a great deal of interest in the clothes worn by her children, but it’s clear from the Medici records that she liked to see her daughters dressed modestly in a simple chemise (known as a ‘camiciotto‘) under a loose fitting dress (called a ‘sottana‘) which were ordered in pretty light colours in velvet for winter or silk damask in the summer. This was the everyday garment worn by Lucrezia as she grew up but for official and important occasions, her mother would order dresses in far richer fabrics and she would have been allowed to wear a few jewels in her carefully arranged hair, which was worn drawn away from the face in a centre parting and then plaited and hidden inside a mesh net at the back of the head. 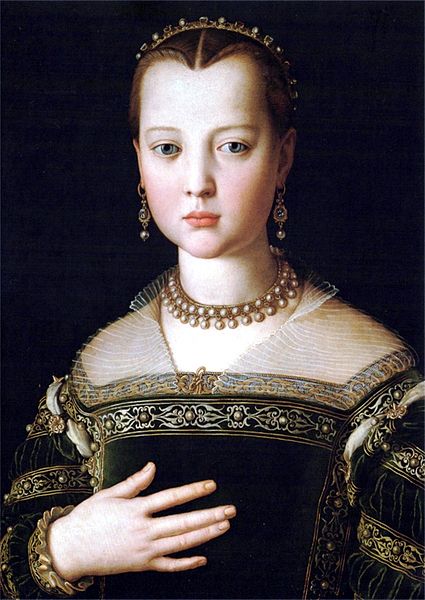 The young Medici were carefully looked after, with every detail of their academic progress and health reported in great detail to their doting parents who took an interest in every part of their lives from their first wobbly baby teeth to their attacks of worms to how much they had for supper in the evening – although their living quarters were rather austere, the Medici children were provided with a varied and excellent diet of meat, fish, fresh fruit and vegetables and fine bread.

Of course, doting and affectionate though their parents were, the young Medici princesses, like their peers all across Europe, would have been in no doubt that their ultimate fate was to be married off in a way that was advantageous to their family’s prestige and were duly carefully prepared and educated for this moment. Luckily for them they were born into an era when the education of princesses was considered to be of as much importance as that of princes which was a boon to the elder girls, Maria and Isabella, both of whom were particularly academically gifted (we are told that Maria was exceptionally talented at Greek) and thrived when sharing lessons in Spanish, French, Latin and Greek as well as the classics and philosophy with their brothers, but rather less so for Lucrezia, who, although she held her own, was not quite so bright. Perhaps she was more pleased with the rigorous training in music, dancing, art and horsemanship that the girls also enjoyed. 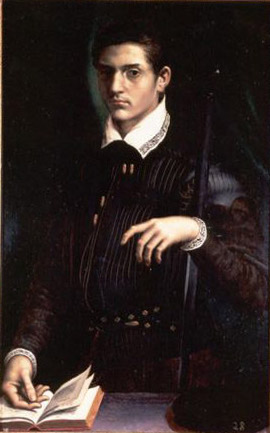 Maria, the eldest girl was the first to be betrothed and was duly engaged to Alfonso d’Este, the dark haired and rather handsome son of Ercole II, Duke of Ferrara and Princesse Renée de France and, more intriguingly, grandson of Lucrezia Borgia. Sadly, however, Maria died in November 1557 at the age of seventeen and before the wedding could take place. Undaunted by this, Cosimo (who was left distraught by Maria’s death and kept her portrait in his rooms for the rest of his life) merely supplanted his youngest daughter Lucrezia for her deceased sister and the marriage arrangements carried on as they had done before.

History does not record what twelve year old Lucrezia thought of her impending nuptials but it’s likely that she was pleased by the prospect of escaping the school room and having her own household where she would no longer be in the shadow of her elder more intelligent and vibrant sisters – even though Maria was dead, she was still very much in the thoughts of her parents and the court.

The marriage contract was drawn up by April 1558 and on the 19th of June, twenty four year old Alfonso arrived in Florence to claim his bride. What followed was several weeks of expensive and elaborate pageantry and celebration, culminating in the wedding itself on the 3rd of July in the beautiful chapel of the Palazzo Vecchio. No expense was spared either on Lucrezia’s gown or the celebrations following her marriage, which included a game of calcio (football basically) in front of Santa Maria Novella as well as the more usual sumptuous banquets and entertainments.

The honeymoon was to be short lived however as no sooner had they been married but Alfonso was off again to fight the French, leaving his bride behind with her family in Florence. Although there was nothing unusual about this arrangement and Lucrezia’s parents were pleased to have her still with them, we can only speculate as to how she must have felt to be a married woman who was nonetheless expected to reside with her parents as if still a child. 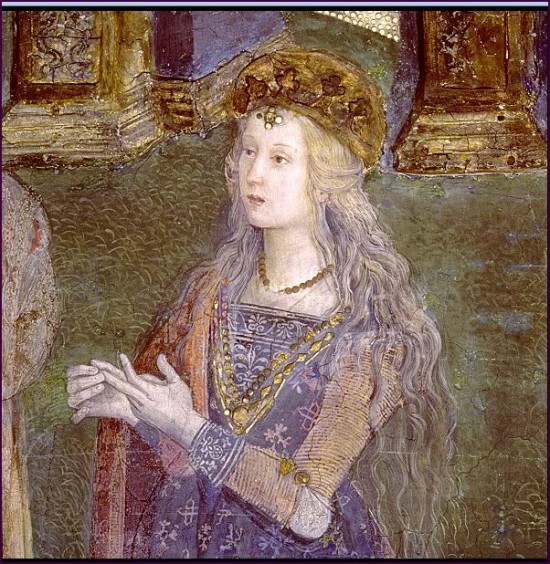 Also, if Lucrezia expected her continued residence in Florence to be a temporary measure, she was to be disappointed as almost two years were to pass before she finally left for Ferrara in February 1560, a few months after the death of her father in law, Ercole II and succession of her husband to the title of Duke of Ferrara. By now she was sixteen years old and ready to take her place as a ruling Duchess albeit in the intimidating footsteps of Lucrezia Borgia and Renée de France, who was leave Ferrara and return to France shortly after her arrival, due to a falling out with her son about her Protestant faith.

It’s unfortunate that the enlightened and intelligent Renée left Ferrara so soon after Lucrezia’s arrival as she may well have proved a valuable ally to the sixteen year old Duchess as she got to grips with her new life – especially as rumour suggests that Alfonso made an indifferent husband to his nervous young bride. This is just rumour though and there is no actual proof of this.

Sadly, Lucrezia’s reign in Ferrara was to be short lived as in April 1561, just over a year after her arrival there, reports reached her family in Florence that she was desperately ill with incessant nose bleeds, profound and unexplained weight loss, a terrible cough and endless fevers. So concerned was her father that he sent his own physician, Andrea Pasquali to attend her but the prognosis was not good and Lucrezia died, aged just seventeen, on the 21st of April 1561.

It’s likely that the unfortunate Lucrezia died of tuberculosis and certainly at the time of her death there were no rumours of any iniquity behind her premature demise – her father would surely have reacted with fury if there had been any such suggestion and remember that his physician was on hand when she died and would have noted any suspicious symptoms. However, over time rumours have started that she was poisoned, probably by her husband, who was either driven to rage by her apparent inability to bear a child or was possibly just ever so slightly unhinged. He was a cultured man though and there isn’t really any evidence to prove that he was the boorish wife beater of legend, determined to revenge himself on his barren wife. In fact, we know that his next two marriages, to Barbara of Austria and Margherita Gonzaga, were actually relatively happy even if they didn’t provide him with any children either.

It’s still desperately unfortunate for poor Lucrezia though. I can’t help feeling sorry for her as I look at her pallid little face in Bronzino’s portrait – so beautiful and yet so sad too. 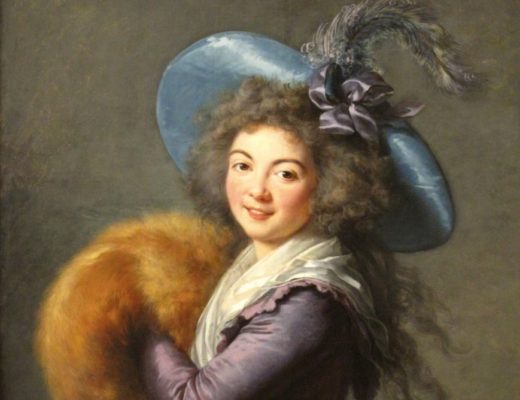 A few Revolutionary relics in the Carnavalet…

Sealed with a Kiss...