New cover for Before the Storm… 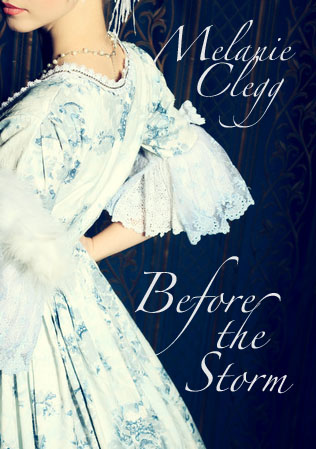 , my novel of posh doom, bittersweet romance and iniquity in the lead up to the French Revolution, has a lovely new look!

I’m really REALLY pleased with how well it turned out.

Unable to attract suitably aristocratic suitors in London, a group of beautiful, wealthy and extremely ambitious English heiresses decide to try their luck in Paris instead. Although they initially take the city of light by storm, they soon discover that the glittering facade of social success hides a multitude of sins and iniquities while their own dark secrets and an implacable enemy could well destroy everything that they have worked so hard to achieve…

Based on The Buccaneers by Edith Wharton, Before the Storm is a tale of passion, betrayal, posh doom and true love set against the backdrop of the opulent and often treacherous worlds of Georgian London, Marie Antoinette’s Versailles and the bloodshed and terror of Revolutionary Paris.

‘It was a blissfully warm day. The worst of the heat wave was now over and a light flower scented breeze blew leaves into the pavilion where the party drowsily lazed against cushions, idling listening as Eugène d’Aigueville played his guitar, his eyes fixed on Venetia, who smiled lazily back at him.

Comte Edmond reclined in between Phoebe and Eliza, none of them spoke but the air around them shimmered with tension as both girls subtly did their best to claim his attention for themselves. Phoebe had long since realised that she was fighting a losing battle though and that although he very much enjoyed flirting with her, it was Eliza that he looked for first whenever he walked into a room.

Eliza did not share this view though and kept thinking about Venetia’s wedding day when Phoebe, radiant with sexual confidence had told her that she wouldn’t let her chastity stand in the way of making a good match for herself. She curled her hands into fists every time Comte Edmond and her friend left the room together and tried not to think about what they might be doing. He’d tried to kiss her once, but she’d shoved him away. Perhaps that was a mistake? She looked across at him now as he gazed up at Phoebe and her heart sank.

‘Who is that woman?’ Phoebe said suddenly, shielding her blue eyes as she looked back towards the house.

Venetia followed her gaze and gave a nervous laugh. ‘It’s your landlady, Eliza,’ she said, with a quick look at Edmond, who immediately sat up and automatically began to retie his loosened cravat. ‘Madame de Saint-Georges.’

They all stood up and instinctively, Eliza, Phoebe and Venetia stood close together as Corisande de Saint-Georges hurried across the lawn towards them. She had dressed to impress in a shimmering, rich lace trimmed blue and white striped silk gown, with wide skirts pulled back from flounced flower sprigged white silk underskirts. A huge muslin fichu was arranged around her shoulders and on her elaborately curled, ringleted and backcombed powdered hair was a vast ribbon and flower bedecked white straw hat.

‘Goodness me, she really means business,’ Venetia murmured as they watched this vision of elegance and high fashion approach. She looked back over her shoulder at Edmond, who was standing uneasily behind them, looking as if he desperately wished he could run away. ‘I wonder what she wants?’

Review on For Book’s Sake:

‘Before the Storm, tells the story of a group of young Englishwomen who meet in Bath and, frustrated by their inability to land a suitable British husband, go to Paris to try their luck with the French nobility.

Given that the French Revolution looms, you can’t help thinking their timing is a bit off. Described by the author as “a tale of iniquity and posh doom”, it contains all the staples of good historical romance, from upwardly mobile marriage-minded Mamas to a governess with a secret past.

However, like her previous novel, Blood Sisters, it is a book more about the bonds between the women than it is a love story. The real love story is between Clegg and Revolutionary France, and she matches historical detail with a vivid imagination…’