Ah, it’s that time of the year when people better organised than my husband and I head off on their holidays. Oh, don’t pity us, we may have been tardy in getting our holidays sorted out but we’re making up for it in the autumn with not one but two foreign jaunts planned.

I’ve had several requests for book recommendations, most particularly novels set during my ABSOLUTE LOVE AND DELIGHT, the French Revolution. I’ll never understand why people seem to shy away from the French Revolution as much as they do – what other period in history offers both so much glamour and also gore as well as a fabulous cast of personalities. Okay, there’s the Tudors and um all those several other glamorous and also gory periods of history but besides all that, what other one?

I’ve been madly in love with the French Revolution ever since I was a very very little girl and I watched the Blue Peter drama about Marie Antoinette. I found it utterly entrancing. I think my obsession reached its peak in 1989 with the bicentenary celebrations which to my delight involved loads of films and documentaries on British television as well as a fabulous exhibition in London and, for me at least, a trip to Paris in July at the tail end of all the hoopla.

I’ve often been mocked for all this of course – I carried a copy of David’s portrait of Louis-Antoine de Saint-Just (oh sigh) in my purse for years and YEARS in my early teens, which caused much mirth amongst my friends and oh, the silence that fell not once but TWICE across the table on the final night of an undergraduate visit to Paris when my tutor asked what the highpoint of my trip was and I replied ‘Seeing the mass graves from the Terror at Picpus’ and then on being asked what my favourite war was by a friend, replying ‘The Vendéan War’.

Moving on, as you can imagine, I’ve read more than anyone’s fair share of French Revolutionary novels over the years – the high point being for my GCSE English Literature ‘long essay’ when I decided to compare and contrast ‘A Tale of Two Cities‘ by Charles Dickens, ‘The Wanderer‘ by Frances Burney and ‘Les Dieux ont Soif‘ by Anatole France as examples of French Revolutionary narrative and bias. Yes, that’s right, at GCSE level. I had it BAD.

1. The Gods Will Have Blood (Les Dieux Ont Soif)

Probably my favourite book while I was growing up; I’ve read this one countless times, thrilled anew each time by the horrible and rather pretentious failed artist and eventual Tribunal judge Évariste Gamelin and his doomed love for the really not all that nice Élodie Blaise, who has a fondness for watering her red geraniums and having sexual fantasies about being guillotined. It’s a pretty fabulous albeit dour look at Parisian society, their terrors and their passions, during the Terror.

2. Mistress of the Revolution

A vibrant, gripping and ultimately touching account of the romance between fiery aristocratic redhead Gabrielle de Montserrat and the rather ill favoured Coffinhall, another one of the Tribunal judges only a real one this time. By all accounts a rather unprepossessing gentleman, he’s been given a Thomas Cromwell like makeover here and becomes HOT STUFF. I adored this book – especially the bits set during the Revolution itself where the claustrophobia, paranoia and fear felt by Parisians and in particular those with something to hide is excellently conveyed.

No list of French Revolution novels is complete without Monsieur Pimpernel himself! Okay, liberties are taken with historical personages, chronology and, well, pretty much everything else but that doesn’t detract ONE IOTA from the fact that this is a rip roaringly fun read. If you’ve never read it then you really should and then watch firstly the film with Anthony Andrews and then the series with Richard E Grant and, oh sigh, Martin Shaw.

4. A Place of Greater Safety

This is quite possibly my favourite book OF ALL TIME beside Mantel’s Wolf Hall and Bring up the Bodies as well as From Hell. I still remember buying my copy shortly after the book first came out, on my way back from picking up my triumphant A Level results at Colchester Sixth Form. The sun was shining, I’d proved that it’s possible to KICK ASS even if you spend 75% of your time truanting, subsist on the badly spelled notes of others, have a miserable home (actually, by the time I picked up my results, I was technically homeless but that’s a story for another day) life, get knocked up and never do any revision. No wonder therefore that Mantel’s precociously intelligent yet scatter brained and lazy rebel who is something of a serial sofa surfer himself, Camille Desmoulins caught my imagination and became something of a hero from that point on.

I was expecting a rather conventional love story as the heroine, Thomasina ‘Asa’ Ardleigh chooses between an exciting and rather hot young Revolutionary lawyer, Didier and her far more socially acceptable parti, her wealthy cousin Harry Shackleford who, in an Austen twist, is to one day inherit her family home thanks to one of those pesky entails. Feisty and opinionated, Asa is determined to make a difference to the world and when she is separated from her French lover, she decides to remain single until fate reunites them again. However, when fate fails to intervene, she is forced to take matters into her own hands and leaves the tranquil, beautiful English countryside to head off to 1790s France to find him. An exciting, thought provoking and moving novel about misunderstandings, iniquity, the changing times and a bittersweet love. Excellent stuff.

6. The Way to the Lantern

Apparently this is Mrs John Major’s favourite book but don’t be put off by that as this is actually a rather thrilling and excellently crafted adventure set during the Terror, replete with a dry and rather rolicking humour and a plethora of vividly drawn and robust characters that you’ll be cheering on until the last page. Really well worth seeking out if you can.

I’m manfully ignoring the film of the same name and probably won’t be making any effort to see it, mainly because it sounds completely diabolical in a not even funny way but also because I just can’t get past the horrible costumes and Marie Antoinette’s ghastly wig. If someone had rolled up to 1789 Versailles with that construction on their head then Marie Antoinette would have been the first to politely titter (and Twitter?) behind her fan at their ridiculously outmoded hairdo. ‘Oh la la, that’s so 1778, mon cher!’ HOWEVER, the NOVEL that this is all apparently based on is superb and well worth a read. I especially enjoyed the characterisation of Madame de Polignac.

A gentle, romantic and evocative book about the French Revolution from the point of view of a magistrate’s family in the provinces, which explores the way that big events in far off places can impact with devastating effect on those who think themselves very far away from all of the action. I absolutely loved this book and the ending just astounded me.

9. City of Darkness, City of Light

City of Darkness basically tells the same story as A Place of Greater Safety but more from the point of view of the women close to Danton, Desmoulins and Robespierre. Although I think I prefer A Place of Greater Safety, I also really enjoy this book too and find it a vibrant and gripping account of the turmoil of the Terror. It certainly serves to underline the significant role that women played in the Revolution which, come to think of it, is probably one of the reasons I am so fascinated by it.

Hands up if you were working your way through the list while thinking ‘Oh, Mme G is such a bloody hipster, she’s totally not going to have A Tale of Two Cities on her list’ well, hah, here it is. It has its less than stellar moments, I’ll admit, but remains quite rightfully THE novel about the French Revolution full of passion, drama, bloodshed, betrayal, beheadings, unrequited love and the SERIOUS HOTNESS that is Sydney Carton. What he sees in Lucie Manette, I don’t know. I vividly remember that when I was working on the aforementioned GCSE essay, I actually got out a calculator to work out Lucie’s age at all the significant points of the book (she’s seventeen when the book begins in 1775, which means that she was born in 1758) and worked out that she is actually in her mid thirties by the time it ends and YET SHE DOESN’T APPEAR TO HAVE GROWN UP OR DEVELOPED AT ALL. Mind you, I also remember thinking at age fifteen, when one is REPLETE WITH WISDOM that: ‘Crikey, she’s a bit old to be inspiring love and having more babies and stuff’. Ah youth. I’m older now than she is at the end of the book and can only hang my pink tressed head in shame.

And there ends my list. I’ve left some out of course – Les Chouans! by my beloved Honoré de Balzac; Ninety-Three by Victor Hugo; The Vendée by Anthony Trollope; The Comtesse de Charny by Alexandre Dumas and more. Have you any other suggestions?

I’ll finish with this clip from the 1989 ITV adaptation of A Tale of Two Cities which they have parlously failed to release on DVD in this country. I probably have a ropey video of it somewhere though, which I really ought to try and dig out as it was superb. Just look at James Wilby’s touching and rather lovely Sydney and Samantha Bond’s completely wooden Lucie Manette. WHAT DO YOU SEE IN HER, SYDNEY? WHAT? WHAT IS IT?

(Wait, you didn’t think I’d let you go without slipping in sneaky links to my own novels set in the French Revolution did you? Psst, Blood Sisters

is a French Revolutionary re-working of Edith Wharton’s The Buccaneers.) 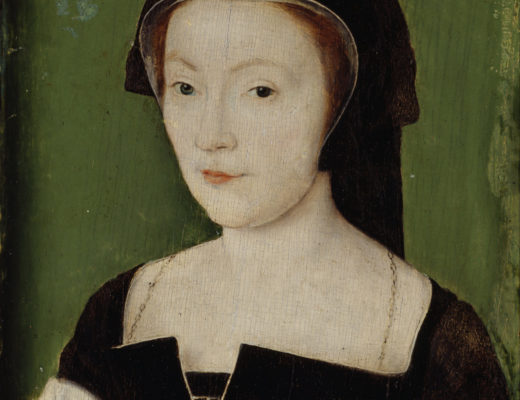