I’ve been busily writing away like a mad thing lately so haven’t done much over the last few weeks. I’ve escaped my laptop a couple of times though so it’s not all bad!

I must tell you about the night out I had a couple of weeks ago with one of my friends. We went to the Milk Thistle in central Bristol, which is a really amazing cocktail bar. You have to ring a doorbell to get in, which made me feel slightly anxious (what if they didn’t like the look of me when they opened the door?) but once I was inside, it was bliss with the kindest, most lovely bar staff I have ever encountered, deliciously unusual (and potent!) cocktails and just the sort of decadent ambience that I most love. I’m seriously considering becoming a member now and it’s top of my list of possible reception venues. Other outings have included the Fashion Museum in Bath, where I went to have a really great meeting about future blog collaborations, which I’m sure you will all love! After the meeting, I had a look around the exhibitions and fell in love with a 1950s red silk evening dress and a quintessential Hartnell cocktail dress in sequin spangled pale mauve satin. Gorgeous. I couldn’t leave without taking a picture of the famous silver dress as well – it dates from the 1660s and to my joy, I found out the name of the lucky girl who originally wore it! I’ll be talking more about that in a future blog post…

Yesterday afternoon, my family and I braved the jolly English summer rain and ventured out to the SS Great Britain for a look around. My husband is a born and bred Bristolian and has only been there once, while I’ve lived here on and off and for years and years and have never once been onboard. I can’t wait to get back there now though as it was amazing. I’m not really one for boats to be honest but I was fascinated by its history. As one of the posters at the exhibit says about the SS Great Britain: ‘It has voyaged 32 times around the world via Cape Horn and the Cape of Good Hope, and covered around one million ocean miles. The ship has called at more than fifteen ports around the world, and braved some of the ocean’s most turbulent seas…‘

I adore the romance of it all and wandered around in a bit of a daydream imagining those long ago voyages to far flung exotic places. They would be at sea for around six months at a time and it was fascinating to see how the passengers in all the different classes would have lived – their cabins were TINY and everyone would have lived pretty much on top of each other. It would have been both incredibly uncomfortable and also the greatest adventure ever.

The boys were particularly taken with the Victorian dressing up clothes and as you can see, I can’t resist putting on a bonnet!

Speaking of the sea, I went to see JAWS at the cinema on my own last week! This is a bit of a big deal as I have a phobia of sharks. I’m so glad I went though as JAWS, weirdly, is one of my all time favourite films and it was fantastic to see it on a big screen. It was almost like watching a director’s cut in fact as I noticed SO MANY new things about the film and highlighted some of the great cinematography that went into it. It gave me a whole new love and respect for it.

Wait, there’s a random dinosaur up there, isn’t there? That’s the Tyrannosaurus Rex that forms part of the dinosaur display living at Bristol Zoo over the summer. My boys adore them!

As for books, I’m still ploughing my way through Shawcross’ biography of the Queen Mother. It’s the book without end – it’s fortunate that I’m really enjoying it! It’s also lucky that I’m reading it on my Kindle as I can’t imagine lugging it around with me everywhere that I go!

I also bought copies of My Daddy Cooks: 100 Fresh New Recipes for the Whole Family

and Wahaca – Mexican Food at Home

– I cannot resist cookery books, I’m afraid. You should see my collection! I keep thinking about starting a blog to chart my progress as I cook every recipe one after the other from all of my cookery books but I fear I don’t have the stamina for such an undertaking!

I also bought the trio of Style Me Vintage

books. I haven’t had a chance to look at them properly yet but am looking forward to getting some fashion and style tips. I seem to really suit more fitted vintage styled clothes and I love the whole set hair and winged eyeliner look. I’ve been thinking about getting a couple of tattoos at some point soon as well – maybe a Jack the Ripper one on one shoulder and something French Revolution on the other or maybe something relating to all of my books!

That’s all for now! Hope you’ve all had a great weekend! I’m going to finish watching this episode of Marple (I bought yet another boxed set last week as I can’t get enough vintage crime!) and then go out and water my new red potted geraniums and lavender bushes – we’ve had to postpone our Paris holiday until the autumn so I’ve brought a bit of Paris to my front garden to tide me over until we can go! We’re also talking about a trip to Rome at some point, but I’m not really sure what I can do to evoke that around my house other than the sweet mingled aroma of espresso and my favourite zuppa inglese ice cream…

Portrait of the Week – Maria Amalia of Austria 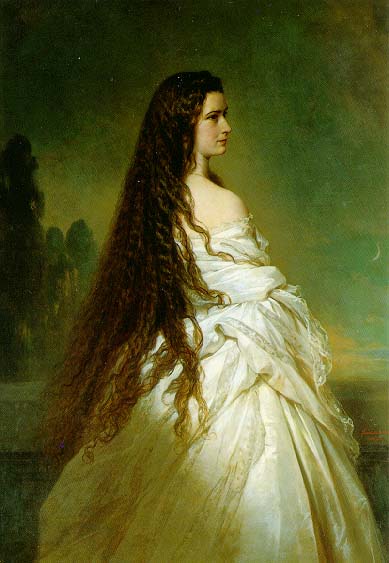 Another week, another load of pointless waffle...