Rosalie Chodkiewizc was a contemporary of the Princesse Joseph de Monaco and met the same grisly end on the scaffold during the Terror.

She was born in Chernobyl, Poland on the 16th December 1768 and was married at a young age to the Prince Alexander Lubomirski, whose father had been a candidate for the Polish throne.

According to Olivier Blanc: ‘A passionate lover of literature, music and travel, the princess wandered across Europe during the years prior to the Revolution. She was twenty years of age, ‘beautiful as a painting of Venus’, and she was to be seen at Vienna, London, Nice and Paris, where, like many young liberal aristocrats, she applauded the events of 1789.‘

Rosalie was therefore something akin to what we would call a jet setter, a demi-mondaine who travelled the continent, took countless lovers but was also, clearly, a denizan of the important political and artistic salons of the era as she maintained friendships with Marie Antoinette and other important personages in Versailles and Paris.

In 1791, Rosalie left France and returned to Warsaw where she supported the ‘Polish Patriots’ in their struggles to bring about a revolution. Frightened by the spectre of Jacobinism, the Russians and Prussians ruthlessly turfed the Polish revolutionaries from their home land, deporting many to Siberia and so they fled elsewhere in Europe. Rosalie Lubomirska escaped to Vienna then went on to Lausanne before returning to Paris in early 1793.

She stayed at the luxurious and beautiful Hôtel de Salm with her lover, the Prince of Salm-Kyrburg and his unmarried sister, Princess Amelia of Hohenzollern. After the execution of Louis XVI, Rosalie allied herself with the royalist cause and after a row with the Prince de Salm, she set up home with her daughter Alexandrine, in her own house in Chaillot where she played hostess to a stream of Polish and English guests, many of whom where known spies and agents of the English government.

Her guests also included the Prince de Talmont, one of the dashing leaders of the counter revolutionary Vendéan army and his younger brother, the Abbé de la Trémoille, who was to become her lover. It is unsurprising therefore that the beautiful Princesse Lubomirska came to the attention of the Commitee of Public Safety and on the 9th November 1793 she was duly arrested and taken to the Petit Force, one of the most dreary of the Parisian prisons.

In late January 1794, she managed to buy a transfer to the maison de santé La Chapelle, which was a big improvement as the maisons des santé were technically hospitals and much more comfortable than the prisons.

She failed to save her life, however and was condemned to death on 30 Germinal on the spurious charge of being an accomplice of Madame du Barry. Rosalie was terrified and immediately claimed to be pregnant, which would delay execution for a short period until she was transferred to the Maison de l’Évêché near Notre Dame where pregnant women were held until they had given birth.

The faithful Trémoille managed to get transferred there as well, determined to remain close to his beloved Rosalie and no doubt, fully aware that she was not really pregnant. According to a fellow prisoner, the two were caught together in the prison bathroom, after which Trémoille was sent to the Conciergerie and guillotined a few days later.

Time was running out for Rosalie. She was in a permanent state of dejection and terror and the news that one of her former lovers, Beaussancourt, had been executed on 1 Messidor while wearing a bracelet with her miniature and a lock of her hair only served to increase her fears. On the same day, another tactless prisoner, the General Carteaux wandered the prison singing a song about Trémoille and Rosalie, which had a bizarre effect on Rosalie and she fell into terrible convulsions, which spread through the other female prisoners.

She was taken away to the Conciergerie ten days later, on 12 Messidor when it was noted that she had still failed to show any signs of pregnancy. Her final letter was addressed to Princess Amalia of Hohenzollern:

‘Farewell, Amelia, soon I too shall cease to be alive. Remember your friend and love me in the person of my child. Rosalie.‘

After her death, her remains were cast into the common graves at Picpus and her daughter, Alexandrine was taken in by Princess Amelia. Alexandrine, who inherited her mother’s famous beauty would later become Princess Rzewuski and would be the terror of Honoré de Balzac, who married her beloved niece. 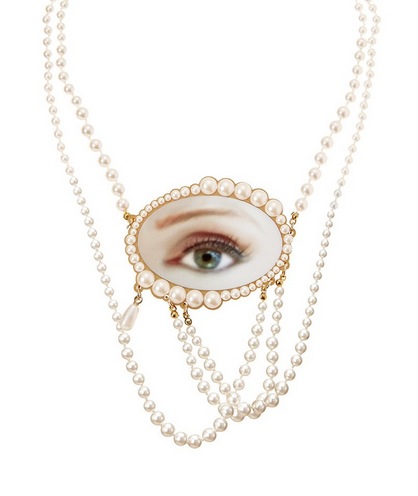