I’ve been longing to read Palace Circle ever since it first came out but for various reasons have only just managed to do so. To be honest, I kind of wish that I had left it on my wish list and not bought it as I feel a bit let down and by far preferred the clearly imaginary book that I had convinced myself that it would be, which was a sweeping tale of passion and posh doom in pre Second World War London and Cairo with lots of frolicking about, scandal and iniquity.

I suppose that part of the reason that this book annoyed me so much is that I’d just had my own knuckles soundly rapped for doing too much telling and not enough showing in the first draft of my Minette novel (that’s how I write in the third person, I’m afraid – lots of narrative at first that I later cut out and replace with my by far preferred chatter once I’ve got a handle on the characters) and this book was pretty much entirely made up from a vast profusion of TELLING. It made me furious in a sort of ‘how come this writer gets away with it and I don’t?’ sort of way.

Well, truth be told, okay it may have slipped past an editor but they haven’t actually got away with it because it’s pretty obvious and also really infuriating. I really hated the way that the action jumped several years mid paragraph, that scenes that should have been explored fully (didn’t we deserve to see one of the main characters getting married rather than a sentence devoted to their nuptials?) were treated as asides while other scenes that bored the pants off me went on for pages and pages and, oh God make it stop, pages.

I loved the descriptions of Cairo in the first half of the twentieth century but found myself skipping vast tracts of the book towards the end because all the lecturing about tedious political stuff really bored me. Sorry. I just wanted more about the characters and their personal dramas!

I also felt very let down on the iniquity and scandal front – in fact the characters seemed to be tiresomely opposed to such things and a lot of effort was made to avoid such ripples of drama and excitement. Some tension was thrown in with the Big Secret, which was pretty obvious right from the start and only caused more annoyance because it could have been avoided had two of the main characters actually bothered to have a rational conversation with each other rather than just getting all dewy eyed and scampering off to the bedroom together.

It wasn’t all frustrating though – I very much liked Davina and her story up until she returned to Cairo and it all went a bit political. I’d have preferred that the whole book moved a bit more slowly and was entirely from Delia’s point of view to be honest – maybe cutting out the earlier stuff about her marriage and starting it from the point that her daughters were almost ready to come out? I don’t know. I’m not an editor but there was something a bit off with the pacing here, which I don’t think was the author’s fault to be honest as she’s a good writer and there was lots here that was really fun to read. I just would have preferred more of the fun and lovely descriptions of places and clothes and a LOT less of the politics and stiff upper lipped determination to avoid scandal. Anyway, I absolutely loved Rebecca Dean’s The Golden Prince and am VERY MUCH looking forward to her novel about Wallis Simpson (who appeared in Palace Circle and was rather ace, which was nice) which is coming out soon and looks great so I think this one is just a bit of a blip, at least as far as I am concerned any way. You may well love it! 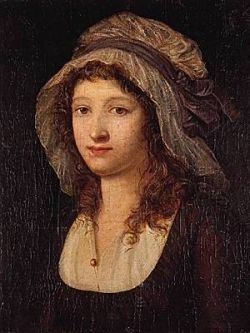 Charlotte Corday and the Murder of Marat