A beautiful portrait, recently sold at Sotheby’s, of Adélaïde Genet, Madame Auguié (1758-1794), the sister of Madame Campan and one of the last femme de chambre of Marie Antoinette. This gorgeous pastel portrait is by Anne Vallayer-Coster and was probably exhibited at the Paris Salon in 1781 and later copied by Kucharski.

Madame Vigée-Lebrun, who knew both Madame Auguié and her sister, Madame Campan very well described Adélaïde thus: ‘I have known few women as beautiful and as agreeable as Madame Auguié. She was tall with an attractive figure; her face, with its complexion of peaches and cream, was fresh, and her pretty eyes shone with gentleness and kindness.’

Marie Antoinette was very fond of Adélaïde Auguié and refered to her by the nickname ‘my lioness’, in tribute to her unusual height and proud bearing. The Queen’s fondness for her femme de chambre was fully repayed on the night of 5th October 1789 when Adélaïde was one of the two ladies who kept vigil outside the Queen’s bedchamber and raised the alarm when the mob broke into the palace. It was Adélaïde Auguié who ran to the guardroom to see the blood covered guardsmen there then ran back to her mistress’ bedchamber to wake her up with the cry ‘Madame, you must get up at once!’ before helping the bewildered Queen from her bed and escaping with her down the corridor that led to the King’s apartments.

In gratitude for her services on that night, Marie Antoinette bestowed on Madame Auguié one of the splendid and immense nécessaire cases that were made for the escape to Varennes.

Along with Madame Campan, Adélaïde remained with the royal family until the very end, leaving only in  August 1792 when they left the Tuileries and were taken to the Temple. Faithful, loyal Madame Auguié’s final act for her mistress was to slip her 25 Louis, knowing that money would now be in short supply for the beleagured, unfortunate Queen.

Sadly, Madame Auguié was so distressed and overset by the execution of her former mistress, Marie Antoinette and so terrified by the prospect of her own inevitable arrest that she committed suicide by self defenestration on the 26th July 1794, leaving three young daughters: Antoinette (1780-1833), Aglaé (1782-1854) who would marry the celebrated Marshal Ney on the 5th August 1802 and Adèle (1788-1813), later Madame de Broc, who was to be best friends with Hortense de Beauharnais.

This beautiful pastel is by Adèle Auguié and depicts her sister Aglaé and Hortense de Beauharnais. It was probably drawn while the three girls were pupils at Madame Campan’s school together.

Sadly, the lovely Baronne de Broc, who seems to have been adored by all who knew her was to die at the age of twenty five in a tragic accident on the 10th June 1813, while visiting the waterfall at Grésy at the Gorges de Sierroz with Hortense and another lady in waiting, Madame Parquin. It seems that the ladies were crossing the ravine by the waterfall on a narrow plank of wood which overturned when Madame de Broc pressed her parasol down upon it, sending her to her death. Hortense desperately tried in vain to save her friend by throwing her shawl into the water but was too late. She was devastated by Adèle’s death and erected monuments to her both at the Gorges and also on her estate at Saint Leu.

Adèle’s sister, Aglaé’s marriage to Ney was arranged by Joséphine Bonaparte and Madame Campan, who decided that it would be the perfect match for them both. Luckily the young couple liked each other and they were duly married at the Chateau of Grignon, which belonged to Adèle and Aglaè’s father.

Ney was to be one of Napoléon’s original eighteen Marshals of France and would later recieve the honours of Duc d’Elchingen and Prince de la Moskowa. The Ney couple were very fond of each other and were to have four sons: Joséph Napoléon, Michel Louis Félix, Eugène Michel and Edgar Napoléon Henry.

After the final defeat of Napoléon at Waterloo, Marshal Ney was executed by firing squad in Paris on the 7th December 1815. His devoted wife, Aglaé was to survive him by many years, dying on the 1st July 1854. She was also interred at Saint Leu.

I find it fascinating how a story that begins at Versailles with a faithful attendant to Marie Antoinette can end with the execution of one of Napoléon’s Marshals. and I think that the story of Madame Auguié and her beautiful daughters is a tribute to the courageous adaptability of women during the upheaval of the French Revolution. 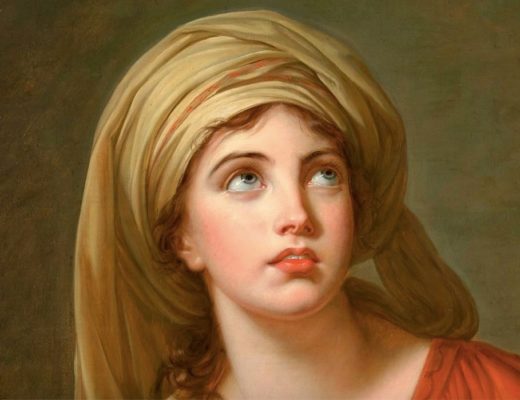