Taking a break from the French Revolution means that I am finally free to read other people’s books about it! Hurray! I’ve wanted to read Season of Light ever since I first heard about it so of course it was one of the first books that I bought for my Kindle.

I was expecting a rather conventional love story as the heroine, Thomasina ‘Asa’ Ardleigh chooses between an exciting and rather hot young Revolutionary lawyer, Didier and her far more socially acceptable parti, her wealthy cousin Harry Shackleford who, in an Austen twist, is to one day inherit her family home thanks to one of those pesky entails. Feisty and opinionated, Asa is determined to make a difference to the world and when she is separated from her French lover, she decides to remain single until fate reunites them again. However, when fate fails to intervene, she is forced to take matters into her own hands and leaves the tranquil, beautiful English countryside to head off to 1790s France to find him.

Rather than the Pretty Girl Picks Exciting Young Man Over Noble But Faintly Dull Suitor tale I was expecting, what I got was very different and the last half of the book was full of surprises and twists. The main twist was, I think, pretty obvious from fairly early on but that didn’t diminish my enjoyment at all. Asa’s disappointment when the full extent of the emotional and political quagmire awaiting her in Revolutionary France was revealed was very well addressed and genuinely upsetting.

I really enjoyed this book – as someone who has studied the French Revolution in a lot of depth since my early teens, I wasn’t jolted out of the story by any glaring errors or inaccuracies and I thought the tension, suspicion, paranoia and general grimness of Paris during the Terror was very well drawn. I rather love those dashing Revolutionaries so Didier ought to have been just my type but I didn’t really see what Asa saw in him or how he managed to inspire so much mad passion, but each to their own.

What I really loved was the depiction of excitable chatterbox, Charlotte Corday – one of my heroines, who rarely seems to make an appearance in fiction for some reason. Her demise was to drag more than one person down with her and Asa finds herself dangerously embroiled in the ensuing wave of suspicion and finger pointing after her execution, which made for a genuinely chilling and suspenseful read.

I also loved that my own city, Bristol made an appearance here – it doesn’t appear in fiction nearly enough so it was nice to see it through eighteenth century eyes for once. Slavery is a central theme in this book – both of slaves and also of women (what became of the poor tailor’s wife, I wonder?) and is very sensitively handled although as ever it’s difficult to comprehend how anyone could EVER think it was an okay thing to do.

In summary, I really recommend this book if you love well crafted historical fiction, the French Revolution, hot young Revolutionaries and unusual love stories. If a collision between the worlds of Austen and the Scarlet Pimpernel sounds like your thing then you will LOVE this.

I gave this four out of five stars on Goodreads.

Edited to add: I’ve been thinking about the end of this book all day long and have come to the conclusion that it was really quite moving and I also really love the bittersweetness of what happens between Asa, Didier and Harry in the last chapter. No, there’s no Sydney Carton like shenanigans, but something else that has really made me think about the nature of love as opposed to infatuation.

Marie Antoinette in a redingote gown 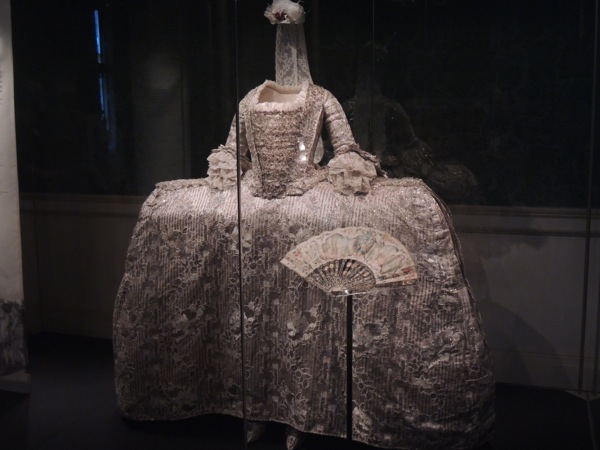