I’ve been having a lot of fun reading my new 100 Dresses book, which highlights 100 of the very finest and most iconic and evocative dresses in the vast collection of the Costume Institute at the Metropolitan Museum in New York. I’ll be featuring some of these dresses, and others, in detail over the next few weeks and thought I would start with this amazing court dress from the 1750s.

I can’t imagine wearing something as cumbersome and imposing as this, can you? It’s gorgeous though, isn’t it? Oh, so many questions today! This dress was bulked and held out at the sides by panniers made from whalebone or bent willow wands, creating an imposing and elegant silhouette.

I’m fascinated by how narrow it is and have visions of the ladies of Versailles and St James’ Palace edging sideways like crabs through the gold and white doorways, probably while the equally sumptuously dressed gentleman chortled behind their lacy sleeves at them.

This particular silk and silver thread robe à la Française evokes thoughts of Versailles during the gallant, licentious, rose scented aegis of Louis XV and his divinely fair mistress Madame de Pompadour, but is in fact English in origin so would have been worn at the rather more staid (in appearance anyway) court of George II.

During the eighteenth century there were various different styles of dress, most predominently the polonaise, the robe à l’Anglaise, the robe à la Française, the sacque and the volante. My personal taste is for the polonaise, which I will save for a different post but the formal robe à la Française is perhaps the most becoming style and one that is most quintessentially ‘eighteenth century’ in style.

‘The robe à la française was derived from the loose negligee sacque dress of the earlier part of the century, which was pleated from the shoulders at the front at the back. The silhouette, composed of a funnel-shaped bust feeding into wide rectangular skirts, was inspired by Spanish designs of the previous century and allowed for expansive amounts of textiles with delicate Rococo curvilinear decoration. The wide skirts, which were often open at the front to expose a highly decorated underskirt, were supported by panniers created from padding and hoops of different materials such as cane, baleen or metal. The robes à la française are renowned for the beauty of their textiles, the cut of the back employing box pleats and skirt decorations, known as robings, which showed endless imagination and variety.‘  – Met Museum.

Nothing could be more graceful than the way that the heavy folds of this gown fall to the floor. This particular dress is French and dates from between 1750-1775 – the wide dating here reflects just how little basic fashion changed during the middle years of the eighteenth century with dresses reflecting the same basic shape for more than one decade.

These dresses are French and made from hand painted silk taffeta. You can just imagine them being worn at Versailles by Madame de Pompadour and her friends can’t you?

Another beautiful French robe à la Française, this time made from a pale blue silk cotton that’s vaguely reminiscent of a Cath Kidston tea towel. This dress, lighter than its silk taffeta and brocade counterparts would have been worn during the day.

It’s a contrast to this lovely but very fragile looking French robe à la Française from the early 1770s. This is the sort of dress that women would have worn to balls, the theatre or parties during the years that Marie Antoinette was Dauphine of France and in the early part of her reign. You can almost a sense the change, the first glimpse of things to come in this dress – it’s formal but there’s a delicate lightness of touch here.

So, which is your favourite? 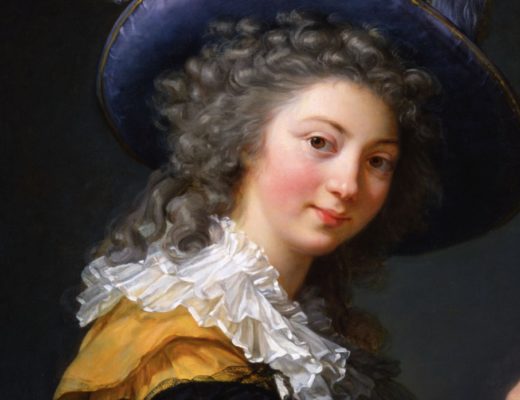