So, what did you all think of last night’s first episode of Whitechapel? I found that it really stood up well to a repeat viewing (haha, how smug am I?!) and was just as gloomy, gruesome but shoot through with humanity and humour as I recalled. I love the relationship between DI Chandler (Rupert Penry-Jones) and DS Miles (Phil Davis) as their sympathy, admiration and understanding of each other continues to grow.

It was gory though wasn’t it? I must admit to having a limited knowledge of the Krays and had, in my naivety, imagined that they just roughed people up a bit. I mean, why else would every second person in the area (including an uncle – by marriage, I hasten to add) be so keen to claim that they knew them in some way? I had no idea that their behaviour was quite so vicious and unbalanced and it made for really uncomfortable viewing at times.

I may not totally understand it, but you can sort of see why people are so eager to be connected to them in some way as, horrible though they undoubtedly were (except to their mum as we are so often reminded), they are steeped in legend, a rather seedy sort of glamour and are also absolutely intertwined with the history of the East End. And it is the threads of all of this that Whitechapel skillfully pulls together to create a sinister, paranoid world of murder, corruption and menace.

Rupert Penry-Jones has his own take on the Kray’s popularity: ‘I was fascinated by the Krays and what I found so fascinating is that they were minor celebrities and it became cool to hang out with them.  Having said that, most people were scared of the Krays, so they would try and make them their friends rather than have them as enemies.’ Which is, of course, totally understandable!

Detective Superintendant Leonard ‘Nipper’ Read, who eventually brought the real Kray twins to justice also points out that ‘East End people were very reluctant to say anything as they saw the Krays as part of their lives but also one of the reasons they didn’t talk is because they didn’t trust the police’. He also says that the people of the area believed that the local streets were safer because of the Krays and the tight hold they had on the underworld of the East End.

‘People would be introduced to them and never believe what they were.  They were an exception and didn’t give a particularly bad impression.  They were well presented and dressed and lived in two very different worlds and enjoyed both.’

‘However they could turn on a sixpence and even their own gang members were afraid of them.’ The references to ‘the legend of the Krays’ may strike one as rather silly at first, but then you recall sitting next to old men in Whitechapel boozers, all keen to tell their tales of the time they bumped into Ronnie or one of their friends drove a car for Reggie or they were in the Blind Beggar on the night that George Cornell got shot and you realise that this is how legends are born.

One of the things that I like best about Whitechapel is the use of location to add to both authenticity and also atmosphere. Although the heart was bombed out of the Spitalfields area during the Blitz, I don’t think there are many more evocative areas in London and this must surely be a gift for the production team because as Sally Woodward Gentle points out: ‘Once again the streets of Whitechapel yield an extraordinary story‘.

For me, the streets of Whitechapel are as much the stars of the show as the actors and plot so I am always looking out for the familiar alleyways, cobbled streets and quirky backstreet pubs that I know and love so much.

The filming of Whitechapel looks to have been a huge and complex undertaking, with the crew shooting in over 80 locations over the course of 39 days. They dealt with this by having a main ‘hero’ location and then moving briefly out for odd little quick segments.

Filming locations used for the production included the Repton Boxing Club where the original twins used to spar, Pellici’s Cafe where they liked to have breakfast and, of course, the Blind Beggar on Whitechapel Road. As Rupert Penry-Jones explains: ‘We are using Whitechapel in a similar manner to the way we used it before, the difference is now we are using locations that echo the 1960s, rather than echoing the Victorian era. You’ve got all these fabulous buildings and we filmed as much as possible in locations that were frequented by Ronnie and Reggie.’

Anyway, having affectively spoilered myself for episodes two and three, I can assure you all that the rest of the series is really fantastic and there are rocky, troubling, disturbing times still to come for Chandler and his team as they delve deeper into the myths of the Krays and Whitechapel.

Whitechapel is on again next Monday on ITV1 from 9pm.

If you fancy watching a great video of the premiere that I attended last week then step this way! See if you can spot me in the audience! 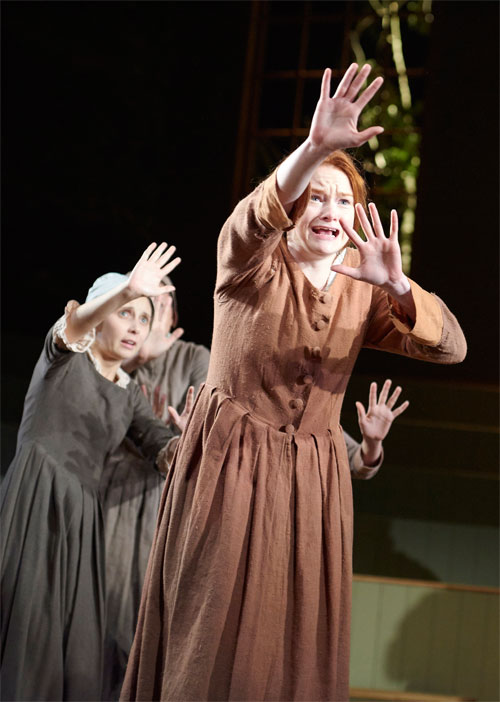 Gin, no whores and the Whitechapel premiere