This is the first in a series of posts about the life of Madame Élisabeth.

Élisabeth Philippine Marie Hélène de France was born at 2am on Thursday, 3rd May 1764, the daughter of the unusually devoted royal couple, the Dauphin Louis of France and his second wife Marie-Josèphe of Saxony, who was affectionately known as ‘Pépa’.

The royal couple were unusual for their domestic harmony and frank and open adoration of each other in a court where it was considered bad form to be openly affectionate towards one’s spouse. The Dauphin was a complicated character: he wrote to a friend that his soul was ‘always gay’ and indeed there was a liveliness and cheerfulness about him that made his company much sought after. However, he had also inherited the morbid nature of his parents, Louis XV and his devout Polish wife, Marie Leczinska and was obsessed with death and dying. His mother kept the skull of the delightful courtesan Ninon de Lenclos on her desk, garlanded with flowers and grinning toothily upon a velvet cushion. She called it ‘Ma chère Mignonne’.

It is recorded that in the early days of their marriage, the young Saxony princess Marie-Joséphe had been horrified to witness her new husband and his sisters spending evenings dressed in black and walking slowly around the dim candlelit room murmuring ‘I am dead, I am dead, I am dead’ in a continuation of a favourite game from childhood. It was unacceptably morbid to a healthy young princess who adored dancing, laughter, being outdoors, having fun and celebrating life.

It didn’t help of course that the young Dauphin had been married once before, to the pretty Infanta Maria Teresa Rafaela of Spain, who was four years his senior. The court had giggled behind their spangled and painted fans at the young bride’s unfashionable red hair, but the Dauphin had fallen immediately in love with her and was thrilled when she became pregnant. ‘I can hardly believe that I am so soon to be a father!’ he wrote to a friend, his delight echoing that of every young father throughout the centuries.

Maria Teresa gave birth to a daughter, Marie-Thérèse, on the 19th July 1746 and died four days later. Her young husband, just sixteen years old at this time, was genuinely devastated with courtiers likening his grief to that of ‘an inconsolable child’, which in many ways he was.

The little princess, his only link with his deceased love, was to live for just two years and would die in April 1748 after being given an emetic in an attempt to alleviate the pain of teething. The court doctors had struck again.

No one knew quite what to expect when the Dauphin was married again, this time to Marie-Josèphe, and she must have been quite perturbed when on their wedding night he collapsed in tears into her arms and sobbed about his dead wife, which must have been somewhat awkward to say the least. You can imagine how the Versailles courtiers must have laughed when the news spread about the Dauphin’s wedding night. ‘That’s no way to woo a pretty young girl,’ they would have tittered to each other.

The marriage seemed doomed to failure until the Dauphin caught smallpox and his little wife insisted on nursing him back to health herself. It is said that she took such great care of him that a short sighted doctor, unused to the court said to the Dauphin: ‘You have an excellent little nurse there. Never get rid of her.’ The Dauphin made a full recovery and filled with gratitude, he fell in love at last with his wife.

The young couple enjoyed a blissful life together, almost a second honeymoon and were to be seen daily at their devotions together in the Versailles chapel before taking the air together on the terrace by the Orangerie. They shared the same tastes exactly – for music, reading and gardening and loved to spend their time together. The Dauphin was a talented musician and played the violin, organ and spinet as well as singing in a very fine baritone. In common with his father’s mistress Madame de Pompadour (known as ‘Pom Pom’ by her lover’s children) he was also a talented actor, capable of reducing an audience to fits of uncontrollable laughter with his comedic roles.

Their lives were not just devoted to pleasure however. Both were keen philanthropists, who loved to assist the needy and were generous givers to charity. They gave instructions to their children’s tutors that the princes and princesses should be taken to the houses of the needy so that they could see for themselves how the poor lived. ‘They must learn to weep. A prince who has never shed any tears cannot be good,’ the Dauphin explained. He was also very fond of taking his sons to view the baptismal register of the parish of Versailles, where their names were written alongside those of more humble infants. ‘Look, my children, look at your names written after the name of a pauper. The only thing that can establish any difference between you is virtue,’ he would say. One can imagine the effect of all this on the young Duc de Berri, who would later become Louis XVI, although at this time he was the second son and was not expected to succeed.

The Princesse Élisabeth was to be the royal couple’s final child. She was baptised shortly after birth by the Archbishop of Rheims, presumably because she was not at that time expected to live long due to being an extremely frail baby. It is likely that she survived only because of the excellent care of her wet nurse, Marie-Thérèse Hecquet, who cared for her most devotedly.

Élisabeth was fortunate enough to be born into a loving, normal, affectionate family but it was to be a short lived happiness as her devoted father, succumbed to consumption a year later and very quickly became dangerously ill, dying at Fontainebleau at 8am on the 20th November 1765 at the age of just thirty six. He asked that his children be brought to see him before the end and is said to have remarked ‘What goodness in her eyes’ about the eighteen month old Élisabeth.

After his death, the Cardinal de Luynes remarked admiringly: ‘There is no Trappist monk who would not envy the way Monsieur le Dauphin has died.’ He was much mourned, particularly by his wife, children and family but also by his friends and the more sober factions at court who had looked forward to his ascension as an antidote to the dissolute behaviour of Louis XV.

The day after his funeral, his beloved wife Pépa cut off her hair and gave up wearing rouge for the rest of her life. She cherished his memory and kept a portrait of her husband by Roslin close beside her, writing to her confessor that: ‘I know that one can only invoke the saints whom the church has canonised, but I don’t think I do wrong, before God. I talk to it, that portrait, as I used to talk to him when he was alive.’

Madame Élisabeth was thought to be very like her father as a child and so the mourning Dauphine kept her close beside her, enjoying her childish prattle and occasional fits of rage, which the older courtiers assured her were very like those of her deceased husband who had been a very spirited child, with a quick and impatient temper.

Marie-Josèphe never ceased mourning her husband and it probably came as little surprise to anyone when she too died of consumption on the 13th March 1767, just fifteen months after the Dauphin and leaving their unfortunate children orphaned and in the indifferent care of their grandparents and aunts.

Who wears it best? (Tudor Edition) 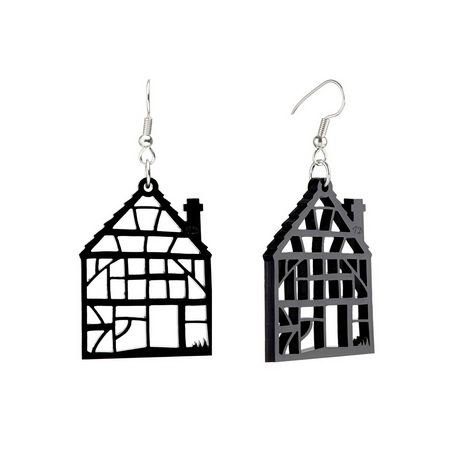 Beheadings are so February...

Portraits from the French court...