Another poster from the Louvre that currently resides in our home, this time in our sitting room. This portrait was painted in 1800 and depicts Jeanne-Françoise Julie Adélaïde Bernard, better known as Madame Récamier.

Juliette Récamier is probably best known now for this portrait, which has remained unfinished since the artist, David, discovered that she was also posing for one of his rivals Gérard and threw a total hissy fit about it. David was a bit prone to this sort of thing.

Portrait of Madame Récamier by Gérard, now hanging in the Carnavalet, Paris. Photos by me.

At the time though she was best known for her weekly salon where the greatest minds of the day would gather and converse pretentiously in that annoying way that only the French have about literature and so on. She was also well known for only ever wearing white, for remaining a virgin for an unusually long time, for being incredibly wealthy, for being the mistress of Chateaubriand (who is best known for giving his name to a steak dish but was a famous writer and diplomat in the nineteenth century), for being the subject of an enormous girl crush on the part of Madame de Staël and, oh yes, for marrying her own father.

Wait, what, I hear you cry. Well, like that earlier French beauty and icon Madame de Pompadour, it is not altogether clear who the lovely Juliette Bernard’s father was and there is reason to believe that the enormously wealthy banker Récamier, who was thirty years her senior and who she married at the age of fifteen was actually her father and had hit upon matrimony as a novel way of making sure that she, his illegitimate daughter, inherited all of his wealth when he died.

I came across an unusual depiction of Madame Récamier many years ago when I went to the Magritte show at the Hayward Gallery in London. The last exhibit was a large sculpture of a coffin arranged to look like Madame Récamier upon her couch, with a lamp placed nearby as in the painting. Stark but effective.

There is also a painted version:

Madame Récamier’s actual iconic couch is held at the Louvre. Where else would it be?

I had a surprising meeting with her likeness at Bristol Art Gallery, where they have a copy of her beautiful bust by Chimard:

Madame Récamier died of cholera at the grand old age of seventy one, allegedly as beautiful as ever although I am sceptical about this.

Why is it that so many women from this time left behind shoes? The shoes of the late eighteenth century were fragile scraps of silk, leather and ribbon that tended to be worn once, like gloves and then thrown away or passed on to a favourite maid so it is incredible that so many survive. 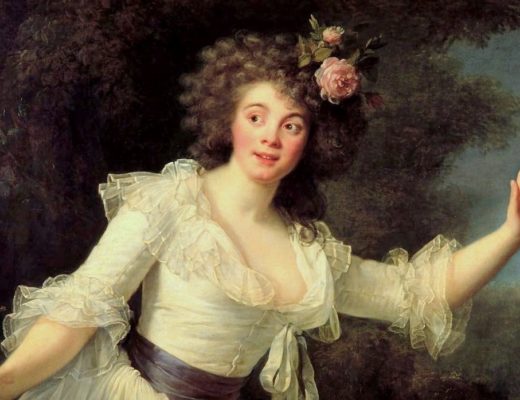